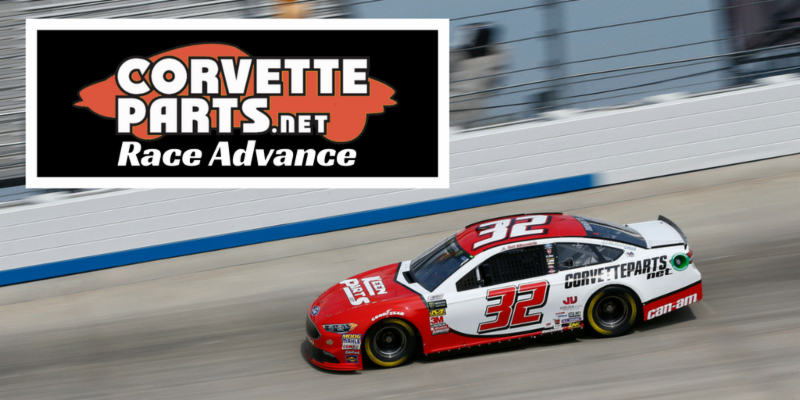 Saturday night’s race at Kentucky Speedway will mark the beginning of the second-half of the Monster Energy NASCAR Cup Series, and the CorvetteParts.net team could not ask for a better swing of momentum than with the finish they earned last weekend in Daytona Beach, Florida. This weekend, Matt DiBenedetto will work with Crew Chief Randy Cox to continue their 1.5-mile racetrack success and together they hope they can find speed in their primary sponsor’s backyard.
CorvetteParts.net, a one-stop shop for everything Corvettes new and old, has been a sponsor of the Go Fas Racing team for many years. Their headquarters in Cleves, Ohio is less than one-hour away from Kentucky Speedway. It’s been a team tradition in past years for the entire Go Fas road crew to join Tom and TJ Keen, the owners of CorvetteParts.net for a team lunch on race-day, and this year will be no different.
DiBenedetto said of the sponsorship, “I know a lot of people get a kick out of the CorvetteParts.net deal on a Ford, but I think that has actually gotten them a lot of attention! I’ve heard a lot of fans refer to our ‘Forvette’ over the last year or so, and while we are really appreciative of Tom and TJ’s sponsorship, I think everyone that knows them knows they are much more than team sponsors. They do a lot for our team and they’re basically family to just about everyone here. It’s always a fun weekend with the Keen group.”
Last Week For the No.32 Team:
Although DiBenedetto doesn’t consider the superspeedways like Daytona and Talladega amongst his favorite tracks on the NASCAR schedule, he tends to excel at them. Daytona holds the second-best average finish for DiBenedetto during his four year Monster Energy NASCAR Cup Series career, second only to Bristol.
Zynga Poker was the primary sponsor for the fourth time this year for the Go Fas team at Daytona, one of the largest ovals NASCAR travels to. The Zynga Poker team had two practices Thursday to work on finding drivability and speed for DiBenedetto, and Friday afternoon, the Zynga Poker team qualified 31st for the 400-mile race.
Knowing the races at Daytona usually bring chaos and big accidents, DiBenedetto and Crew Chief Randy Cox decided to stay out of the big pack and do their best to save the racecar for the end of the race. Even after dropping back on most green-flag runs, DiBenedetto was caught up in a massive crash involving more than 20 race cars early in the race. The Zynga Poker team patched the No.32 Ford after the incident and DiBenedetto was able to get back on track with cosmetic damage on nearly every corner. A few more major accidents occurred with DiBenedetto avoiding each, finding himself 5th coming to a green, white, checkered restart. During the wild final restart, DiBenedetto fought hard with teams much bigger than Go Fas, and drove the Zynga Poker No.32 Ford to a 7th place finish, the best finish in team history.
DiBenedetto on racing at Kentucky Speedway:
“Since the repave a few years ago, the track has widened out a little bit, but it’s still pretty much a one-lane racetrack. It’s actually a pretty unique track for its size though, because turns three and four drive like a short track, but turns one and two drive like a typical 1.5 mile track. The hardest part is getting the car set up well on both ends of the racetrack, you really want a solid run off of turn four because that is where most of the passes are made here. Randy [Cox] has made it a point this year to make sure we excel at all of the tracks we struggled on in the past, and so far he’s delivered some of our best results at those tracks. I expect nothing less this weekend!”
Matt DiBenedetto Career Monster Energy NASCAR Cup Series Stats at Kentucky Speedway:
Starts: 3
Average Start: 35th
Average Finish: 35th
Best Finish: 25th (2017)
Go Fas Racing PR