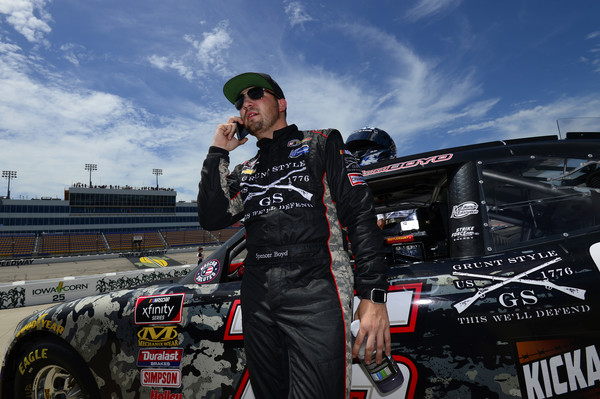 SS Greenlight Racing will bring chassis 704 to Kentucky Speedway this weekend for Spencer Boyd. Boyd previously ran this chassis at Iowa Speedway, where he finished in the 22nd position.

News and notes: After the demolition derby at Daytona International Speedway, Boyd escaped the World Center of Racing unscathed with his best career finish of 17th. The series continues their summer tour with another Friday night under the lights race at Kentucky Speedway this weekend. “I’m really proud of the gains we’ve made as a team lately,” says Boyd. “We survived Daytona and brought home a great finish. Kentucky should be a really good test for us. I’ve never been there before, so I’m just going in with a positive attitude and hope to learn as much as I possibly can.”

Sponsor Highlights:
The team would like to welcome new associate sponsors Fort Scott Munitions and Black Ice Equine on board for Kentucky Speedway. Performance Trailer Braking will also return as an associate sponsor for the weekend. Based in Kansas, Fort Scott Munitions is a United States manufacturer and distributor of lead-free rifle and handgun ammunition. Black Ice Equine is a veteran owned company that specializes in mobile Saltwater Therapy for horses in the Central Kentucky area.

TV/Radio: The Alsco 300 at Kentucky Speedway can be seen live on Friday, July 13th on NBCSN. Race coverage will begin at 8:00 p.m. EST, and the event can also be heard live on PRN Radio as well as SiriusXM Radio, channel 90.

About SS Green Light Racing:  As one of the most tenured teams in all of NASCAR, SS Green Light has been a developmental hub for drivers looking to climb the ranks.  Led by Owner, Bobby Dotter, the team has fielded entries in either the NASCAR Camping World Truck Series or the Xfinity Series competition since 2001.  Coming off a successful 2017 Xfinity campaign, SS Green Light looks to build further momentum with their two-car program.
Spencer Boyd Racing PR/Photo Credit Robert Laberge/Getty Images