TY DILLON RELENTLESS IN HIS SIXTH PLACE FINISH AT DAYTONA 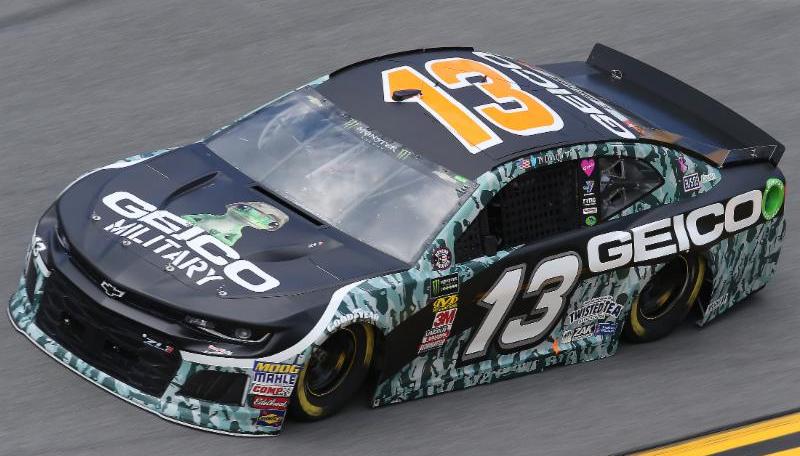 Since the inception of its Monster Energy NASCAR Cup Series program in 2009, Germain Racing’s success at Daytona International Speedway is well documented, leaving the group eagerly anticipating the start of the race weekend. A year ago, Dillon and the GEICO Military machine charged through the field and found themselves in the lead with just a few laps remaining in the race. The young gun looked to duplicate the effort when things got underway beneath the lights on Saturday evening.
While severe weather flirted with the Daytona area on Friday, it relented, allowing for the completion of Cup Series qualifying. Dillon was thankful for Mother Nature’s mercy and took full advantage, pacing the high-banked, 2.5-mile tri-oval in a prompt 47.162 seconds, at a speed of 190.832-miles per hour. His effort placed the No. 13 GEICO Military Camaro ZL1 on the inside of row ten, in the 19thposition, on Saturday night’s Coke Zero Sugar 400 starting grid.
When the green flag signaled the start of 160-laps of racing on Saturday night, Ty Dillon and the GEICO Military team had little idea of the emotional rollercoaster they would soon be riding.

Strolling pit road prior to the race, Dillon and his crew chief, Matt Borland, echoed their game plan, “We’re going to the front.” Resolute in following the strategy, Dillon shot up to ninth in the opening few laps before charging into the top-five on lap 18. “The car feels pretty good here, Matt,” Dillon shared as he paced the legendary speedway.
As stage one came to a close, Dillon backed out of the draft in order to avoid any potential peril and crossed the line in the 15th position. “The car is pretty good, it’s really good off of the corner,” Dillon said as he delivered his car down pit road for his first stop of the night. The Germain Racing pit crew provided the GEICO Military Camaro ZL1 with four fresh tires, a full tank of Sunoco racing fuel and removed tape from the grill.
The green flag waved on lap 47 for the start of stage two, but Dillon reported that he had no fuel pressure and dropped the GEICO Military Camaro to the apron as the field rocketed by him. After recycling his switches, the car quickly took off and Dillon returned to the racing surface, dropping to the 38th position. While the issue served as great frustration in the Germain Racing pit stall, the setback quickly turned to good fortune when, just two laps later, the second caution of the day slowed the field after a crash involving Paul Menard. Given that he was previously running in close proximity of Menard, Dillon would have most assuredly been collected in the incident, if not for the aforementioned fuel pick-up issue. Still on the lead lap, Dillon was back in business and focused on gathering lost ground once the green flag returned the field to action.
Dillon and his GEICO Military machine restarted from the 34th position when the race returned to green on lap 53, but a 15-car crash began only two laps later, leaving Dillon at multiple 90-degree angles as he masterfully navigated his way through the melee. The crafty youngster sustained only splitter damage and once again was thankful for the earlier fuel issue that had relegated him to the rear of the field. The racing gods were keeping close watch on Dillon because any further up in the field and his day would have ended prematurely. He visited pit road multiple times during the caution for repairs. The GEICO Military pit crew worked efficiently and returned him to the track armed with a strong racecar.
Dillon would avoid an additional crash by the narrowest of margins and when the checkered flag signaled the close of stage two on lap 80, he crossed the line in the fifth position, collecting his first stage points of the season.
Dillon and the No. 13 GEICO Military Camaro ZL1 led the race for three laps as the final stage got underway on lap 87 and he would not depart the front of the field until a late-race issue sent him to pit road under green. The ninth caution of the day, on lap 157, would send the 160-lap event into overtime.
Dillon was in the seventh position as the field headed to the start/finish line to begin what was supposed to be the final two laps of the evening. Unfortunately, he reported a flat right rear tire and was forced to visit pit road while the green flag restarted the race. While this would seemingly serve as a dagger to the heart, the Germain Racing pit crew again acted flawlessly and provided him with fresh tires and quickly returned him to the racetrack. Moments later, the caution flag slowed the field and Dillon was spared. The untimely flat tire left the GEICO Military machine at the tail-end of the lead lap, but Dillon would now be back in the game, as the field was bunched up for the restart.
Dillon’s favor at the historic racetrack continued and when the green flag restarted the race for the second overtime, a hard-charging Dillon dashed through the field and gathered positions in bulk before sailing the No. 13 GEICO Military Camaro ZL1 across the finish line in the sixth position.
Dillon ran at the front of the field for the lion’s share of the event and departed the World Center of Racing with his career best finish of sixth, as well as his first stage points of the season.
“This was definitely a great night for our Germain Racing team,” Dillon said after exiting the racecar. “I scored a sixth-place finish when I subbed for Tony Stewart a couple of years ago, but he got the credit. It is awesome to finally have one to my name and officially score my best career finish in the Monster Energy NASCAR Cup Series. I have a lot of confidence running superspeedways. I can usually feel the crashes before they happen. I like to stay aggressive.” He continued, “We brought a fast GEICO Military Camaro ZL1 to the track, and that made it that much easier to feel good going into this race. We were there and prepared to capitalize on every opportunity to bring home a strong finish.”
Germain Racing will now head off to the Bluegrass State for race number 19 of the Monster Energy NASCAR Cup Series season.
Ty Dillon and the No. 13 GEICO Military Camaro ZL1 will hit the track at Kentucky Speedway for the weekend’s opening practice session on Friday, July 13th, at noon (ET). Qualifying will follow at 6:40 PM (ET).
The Quaker State 400 Monster Energy NASCAR Cup Series race is on Saturday, July 14th, and it will be televised live on NBCSN beginning at 7:30 PM (ET). The Performance Racing Network (PRN) will carry the live radio broadcast, along with SiriusXM NASCAR Radio, channel 90.
PMI PR
Post Views: 387