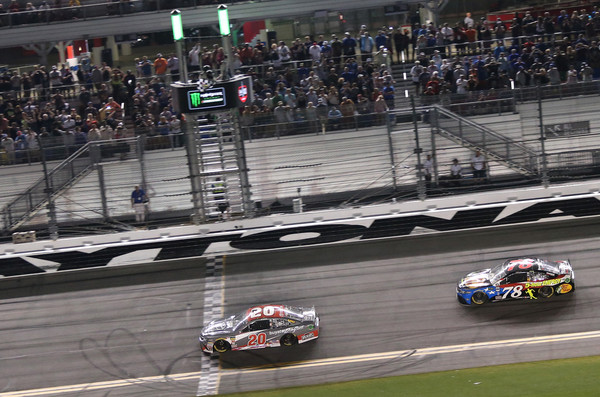 Martin Truex Jr. broke his curse at the summer race at Daytona International Speedway with a powerful runner-up finish in Saturday night’s Coke Zero Sugar 400.
Truex lost to last year’s Furniture Row Racing teammate Erik Jones in the overtime shootout by 0.125 seconds.
But before the final caution came out Truex had the lead and was approximately 100 yards short of the white flag, which would have officially ended the race and sent the reigning NASCAR Cup Series champion to Victory Lane.
When the race was restarted for the final time Truex initially maintained his lead in his No. 78 Bass Pro Shops/5-hour ENERGY Toyota. But as the race was approaching the checkered flag he was left alone without any drafting help that allowed Jones to pass him for the win.
The second-place result was Truex’s best career finish at the summer Daytona race, which has been his Achilles’ Heel through the years with multiple accidents on the famed 2.5-mile oval. He did have one other runner-up finish at Daytona and that was during the 2016 Daytona 500.
Saturday night’s result moved Truex from fourth to third in the overall driver point standings and he remains third in the playoff standings. He has three season wins and 12 top-five finishes after 18 of the 36-race schedule.
Truex, who avoided a number of major multicar wrecks with a sound race strategy, had mixed emotions as he spoke candidly about the final restart in post-event interviews.
“There at the end I wish I could have done better for my team,” said Truex, who led twice for 20 laps. “I had a really fast Toyota but have to get better at blocking, which hasn’t been my strong suit. If I could have blocked the 95 (Kasey Kahne) I would have had control of the race from there. We got too wide and they got racey behind us. I just messed up there. I knew he was coming — I just didn’t block him fast enough. It was the first time at this race we had a car this strong so we have something to build on.
“It was a good run, just came up a little short. Congratulations to Erik and his team. I wish it was us, but if you’re going to lose to somebody he was a good one to lose to.”
Finishing three to eight were:  AJ Allmendinger, Kasey Kahne, Chris Buescher, Ty Dillon, Matt DiBenedetto, Ryan Newman, Austin Dillon and Alex Bowman.
The race had 10 cautions for 46 laps and one red flag for five minutes. There were 25 lead changes among 16 drivers.
The next race is Saturday night July 14 at Kentucky Speedway in Sparta.
FRR PR/Photo Credit Jerry Markland/Getty Images
Post Views: 216