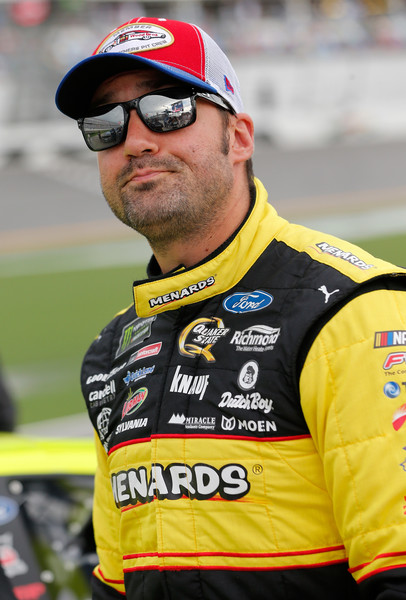 In the first, he drove his No. 21 Menards/Moen Ford Fusion from the 30th starting position to eighth place before the end of the race’s first 40-lap Stage.

In the second, he took a wild ride through the air and onto the infield grass after being hit from behind by the Chevrolet of Jimmie Johnson.

When Menard finally skidded to a stop after the lap 49 incident, the hood of the No. 21 Fusion was in tatters, and the left-front fender was crunched.

The Wood Brothers crew went to work, with NASCAR’s crash clock ticking down the six minutes the team is allowed to repair a wrecked car under the sanctioning body’s Damaged Vehicle Policy.

The crew completed its work with less than 30 seconds to spare and sent Menard back onto the track with the daunting task of making a lap at NASCAR’s minimum speed.

If Menard had been unable to reach minimum speed, he would have been forced to retire from the race at that point, but he was able to clear the benchmark and was allowed to continue on.

With two major multi-car crashes thinning the field, the Menards/Moen team soldiered on, with the goal of gaining as many positions as possible.

Their efforts suffered a setback when the air cleaner of the No. 21, damaged in the incident with Johnson, began to disintegrate. That necessitated a trip to the garage and numerous lost laps while the team made repairs.

Menard returned to the race and finished 28th, 16 laps behind the leaders.

Team co-owner Eddie Wood, like a lot of other team owners following Saturday’s wreck-filled race, was left to wonder what might have been had his driver not been knocked out of contention early on.

“Everything was going fine until we got wrecked,” Wood said. “Paul had driven from the back into the top 10 on the first green-flag run, so the car had good speed even though we didn’t qualify well.”

After the incident with Johnson, it was a matter of making the best of a bad situation.

“If we hadn’t had to go to the garage to fix the air cleaner, we could have salvaged a lot more positions, especially with the way they kept wrecking,” Wood said. “We appreciate Paul and the crew staying with it all night and running to the finish. Greg did a great job managing the repair. It’s amazing to me considering all the work and attention to detail these cars get, Paul was able to run speeds of over 200 mph in the lead pack with the hood and part of the left front fender missing.”

“It’s all good. We’ll put this one behind us and get ready for Kentucky.” The Menard/Moen team remains 17th in the point standings.