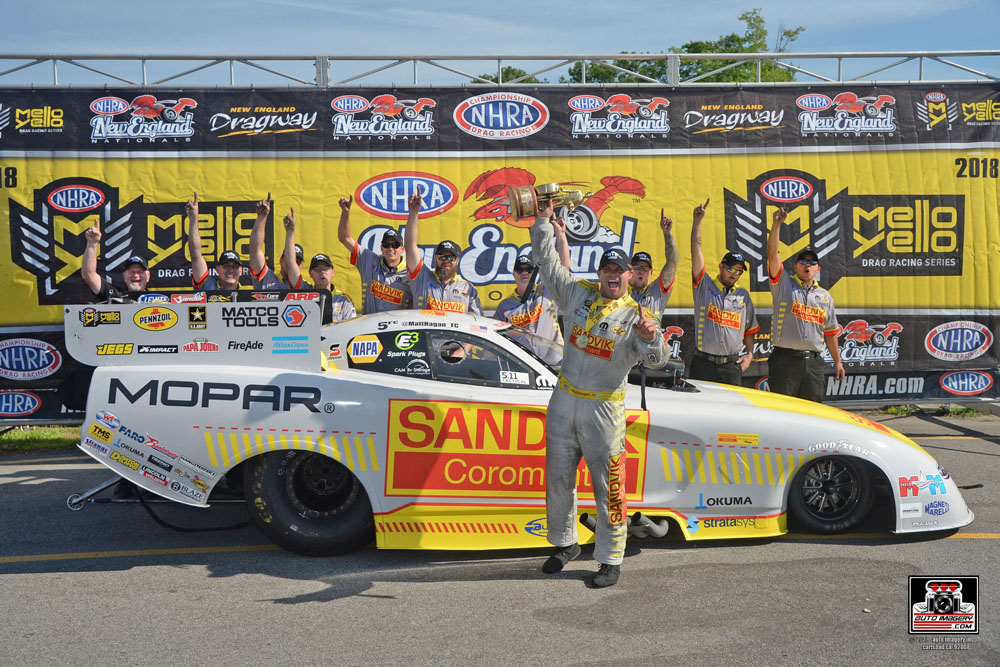 Sandvik Coromant Mopar Dodge Funny Car driver Matt Hagan completed a wire-to-wire weekend at New England Dragway, racing from the pole in dominant fashion to claim his second consecutive win at the NHRA New England Nationals, and his second win in a row of the season.

Hagan’s triumphant ride in Epping, New Hampshire, was the third consecutive and fifth of 2018 for a Don Schumacher Racing (DSR) Dodge Funny Car driver, and the seventh of the season for DSR. The win was Hagan’s third of the season and 29th of his career.

The Sandvik Coromant Mopar Dodge Charger R/T Funny Car driver and winner at the most recent NHRA stop in Norwalk, Ohio, qualified No. 1 and began his march to the event win by taking out Terry Haddock with a 4.066-second E.T. at 316.15-mph that was the quickest of all competitors in round one. Next, in a battle with teammate Tommy Johnson Jr., Hagan’s 4.237 at 245.90-mph run was more than good enough for the win after Johnson encountered problems early.

The defending 2017 Epping winner drew a second teammate, Ron Capps, in the semifinals. Hagan was first off the starting line and first to the finish with a 0.062 reaction time paired with a 4.114-sec at 311.05-mph pass to advance to his 52nd final round and fifth of the season. The two-time NHRA Funny Car world champion remained on-point in the final against Tim Wilkerson, recording a superb 0.042 reaction time in the money round and passing the finish line with a winning 4.156 at 292.01.

“We’ve just got a good race car. I think the biggest thing is (crew chief) Dickie Venables,” said Hagan, who gained almost 100 points on category leader Courtney Force over the course of the race weekend. “The guy is smart. If you give him enough runs and enough opportunities at whatever it is, he’s going to figure it out. I think that’s why he’s been in the sport for over 50-some years. He’s been doing it since he was hanging on his dad’s leg. He’s somebody that I want to keep myself around as long as possible. He works hard, this is his life and it goes to show on the race car. There’s also luck, that last lap it was like a dirt track. My rear-end was sideways and coming back around and I could hear (opponent) Timmy (Wilkerson) over there and you’re looking around to see where they’re at. That’s what makes it exciting in a fuel Funny Car, man. You never know what you’re going to get. I’ve never had the same lap back-to-back.

“This car has just been going down the race track. We turned four win lights on in Norwalk and we turned four win lights on here and we went down every lap in Norwalk and we went down every lap in qualifying here. We just pretty much have what you would call a bracket car in a fuel Funny Car. It’s just responding well to what they’re asking it to do. It makes my confidence grow. As a driver, it makes my lights come back around. I’m more focused on that and I’m not thinking about whether the car might come lose or what it’s going to do if I have to slap the tires. I can get up there and tell myself ‘leave on time, keep it in the groove, turn the win light on.’ You’re focused on what you have to do versus what everything else is going to do.

“I’m proud of my guys. They just haven’t had any mistakes. This whole year my crew has really not faltered. They haven’t had any whoops. They’ve been doing a great job wrenching. They’re very thorough on touching the parts and pieces and making sure they’re going together.”