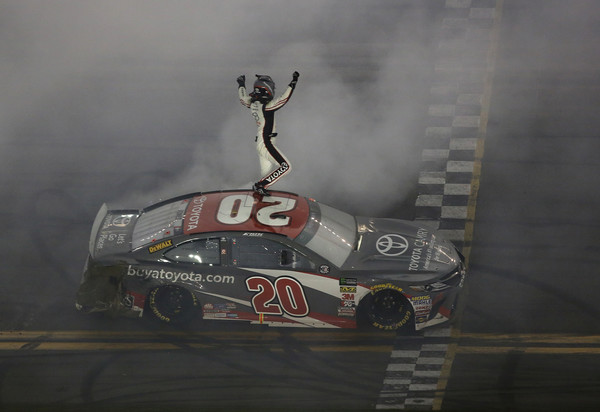 Jones, 22, drove the No. 20 buyatoyota.com Joe Gibbs Racing Toyota to victory, earning a spot in the Monster Energy Series’ playoffs that are contested over the last 10 races of the 36-race season. He edged the reigning series champion Martin Truex Jr. (No. 78 Bass Pro Shops/5-hour Energy Toyota) by .125 seconds. Due to the two overtimes, the race, scheduled for 160 laps, was extended to 168 laps.

“That was something else,” said Jones, who led one lap – the final one. “I thought we were out of it but then we were right back in it. My first Cup win, my first Daytona win, my first superspeedway win. What an awesome day.”

A series of late-race incidents eventually led to the need for NASCAR Overtime. It started on a Lap 155 restart after a caution period; one lap later, a multi-car incident in Turn 3 brought the caution out again. The ensuing clean-up resulted in the first “OT” – a two-lap green/white/checkered finish. Then, another accident on the frontstretch occurred prior to the white flag (start of the last lap), meaning there would be a second attempt at OT.

On the Lap 167 restart, Truex held the lead, with Jones and Kasey Kahne (No. 95 Thorne Wellness Chevrolet) running 2-3. Jones was able to get by Truex, who has yet to win a restrictor-plate race in the Monster Energy Series.

“I’ve never been that good on superspeedways and never thought this was our shot to win,” Jones said. “But to get here tonight, that’s pretty awesome. It’s our first win and not much has felt better than this one.”

The race was divided into three stages. The first two stages were 40 laps apiece with a final stage of 80 laps. NASCAR awardsvaluable extra points that count in the season-long series championship battle to the top-10 finishers in each of a race’s first two stages.

Stage 1 was dominated early by polesitter Chase Elliott (No. 9 Hooters Chevrolet) who led the first 10 laps. But the stage was won by the defending Coke Zero Sugar 400 champion, Ricky Stenhouse Jr. (No. 17 Fifth Third Bank Ford) who led Laps 13-40.

Stage 2 featured the night’s first three incidents with the second, on Lap 54, involving 24 cars including Elliott and former Monster Energy NASCAR Cup Series champion Brad Keselowski (No. 2 Stars, Stripes and Lites Ford). Keselowski started the fracas, getting sideways in the middle of a tight-running pack after slight contact from behind, from Stenhouse’s car.

On Lap 65, a Turn 4 accident sidelined more contenders, such as another former series champion, Kyle Busch (No. 18 Interstate Batteries Toyota), who went hard into the wall after another Stenhouse tap. Stenhouse went on to win Stage 2.

Stenhouse appeared to have perhaps the strongest car still running – until Lap 125 when Kyle Larson (No. 42 Credit One Bank Chevrolet) lost control and spun directly in front of Stenhouse’s Ford. Larson left the race, while Stenhouse got some repairs and got back onto the race track. Stenhouse raced his way back into the top 10 but a spinout on Lap 149 led to a 17th-place finish.