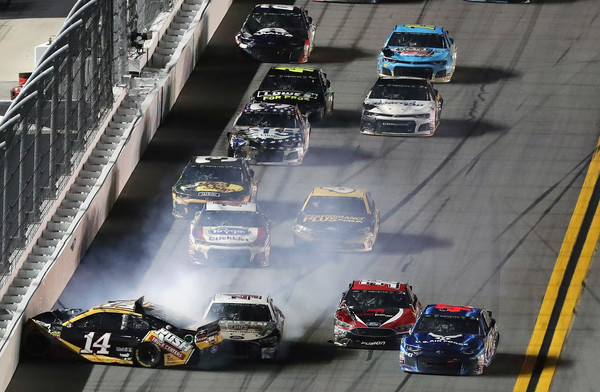 ● Reported his car engine was hot in the opening laps but cooled as the race progressed.

● Climbed into the top-10 before drifting to the back of the lead pack with a tight racecar.

● Rallied to 11th in the closing laps of the stage.

● A 25-car wreck on lap 53 collected Bowyer, who was forced to pit road twice for repairs. There was no suspension damage, but the crew made aerodynamic repairs. The accident eliminated several contenders.

● Stayed on the track during the stage break and restarted second.

● Led the opening two laps of the stage.

● Pitted with 38 to go for two tires. Seconds after he returned to the track an accident brought out the caution.

● Restarted the race in 12th with 23 laps remaining.

● Battled in the top-five in the closing laps and overtime, even running second to teammate Kevin Harvick.

● Contact from another car sent Bowyer into the wall hard, ending his race on lap 162.

●  Harvick led twice for eight laps to increase his laps-led total at Daytona to 244.

●  Bowyer led once for two laps to increase his laps-led total at Daytona to 159.

●  Only 13 of the 40 drivers in the Coke Zero Sugar 400 finished on the lead lap, with 20 drivers unable to finish after being collected in accidents.

“I’m pretty disappointed. I thought we had something there at the end, but I couldn’t keep up without someone pushing me. I hate we got wrecked and lost a good Rush Truck Centers Ford and a good finish. I bet a lot of folks are probably saying that tonight. We tore up a lot of cars.”

The next event on the Monster Energy NASCAR Cup Series schedule is the Kentucky 400 on Saturday, July 14 at Kentucky Speedway in Sparta. The race starts at 7:30 p.m. EDT with live coverage provided by NBCSN beginning at 6 p.m.