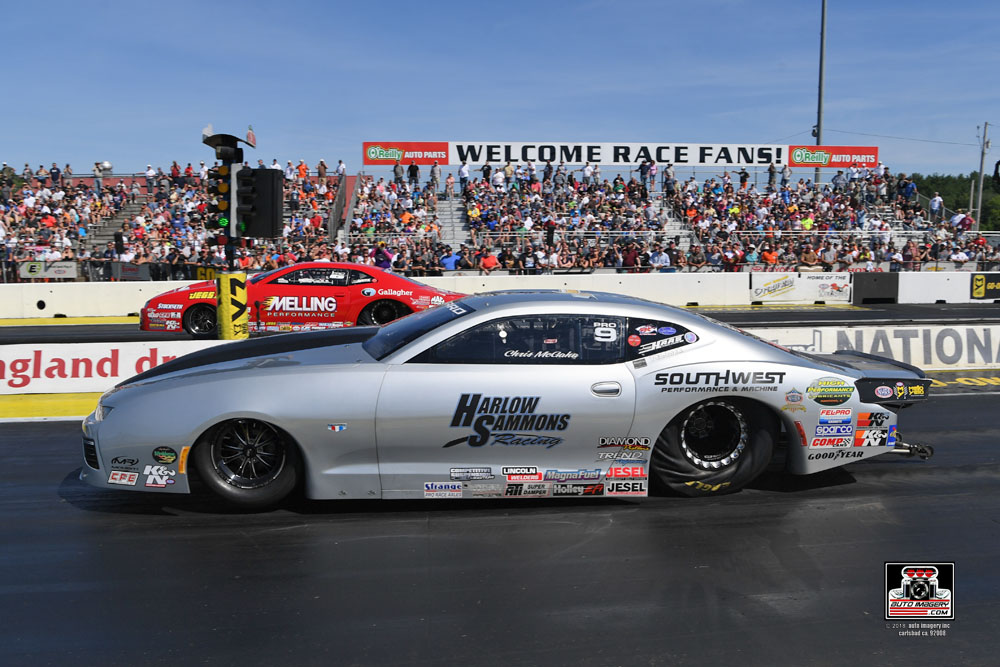 Chris McGaha drove the Harlow Sammons Chevrolet Camaro, affectionately known as the Silver Bullet, to a final round victory at the New England Nationals at New England Dragway. To punch his ticket to the winner circle, he defeated the likes of Jeg Coughlin Jr., Greg Anderson, Kenny Delco, and Erica Enders.

The Odessa, Tex.-native pulled into the staging lanes before first round as the No. 9 qualifier and had a first round matchup against Jeg Coughlin Jr. McGaha showed off his driving chops with a .009-second reaction time and with a .021-seconds starting line advantage on Coughlin, he was able to get the holeshot victory with a 6.576, 210.87 over Coughlin’s 6.569, 211.63.

Second round, McGaha staged up against current Pro Stock points leader Greg Anderson. Once again, McGaha showed that he was not someone to take lightly on the starting line when he had over .050-seconds advantage at the launch on Anderson. The Adam Hornberger-led team clocked in with a 6.585, 210.90 and turned on the win light over Anderson’s 6.574, 211.89.

In the semifinals, McGaha had lane choice for the first time in this weekend’s eliminations against Kenny Delco. As they both went up on the two-step, Delco’s car budged first and turned on the red light with a -.193 reaction time. McGaha was clean and green but both competitors squared the tires just past the 60-foot mark. Seeing the win light shining bright ahead of him, McGaha coasted to a 16.762, 49.34 to Delco’s 15.073, 56.44.

“We definitely dodged a bullet in the semifinals,” McGaha said about Delco going red. “Kenny [Delco] is like my kryptonite. I’ve red-lighted against him before. For him to go red and for us to shake down the racetrack was definitely a freebie.”

In his tenth career final round, it was a Texas-take-all as McGaha lined up next to Erica Enders. McGaha clocked in with a consistent 6.570, 211.20 but the race was already won at the starting line when Enders went red by -.015-seconds.

“Friday, I was ready to take the awning down and go home,” he admitted. “There looked like no hope at all before the engine change Friday night. I thought there was no way we could be here based off of Friday’s performance, but my team really buckled down and got it turned around; the car came to life with the engine change. We’ve got some work to do back at the shop before the Western Swing because our trailer hasn’t been at the shop since Topeka, but we can do it. Man, what a great day.”

McGaha leaves New England Dragway in the No. 6 spot in the Pro Stock point standings.