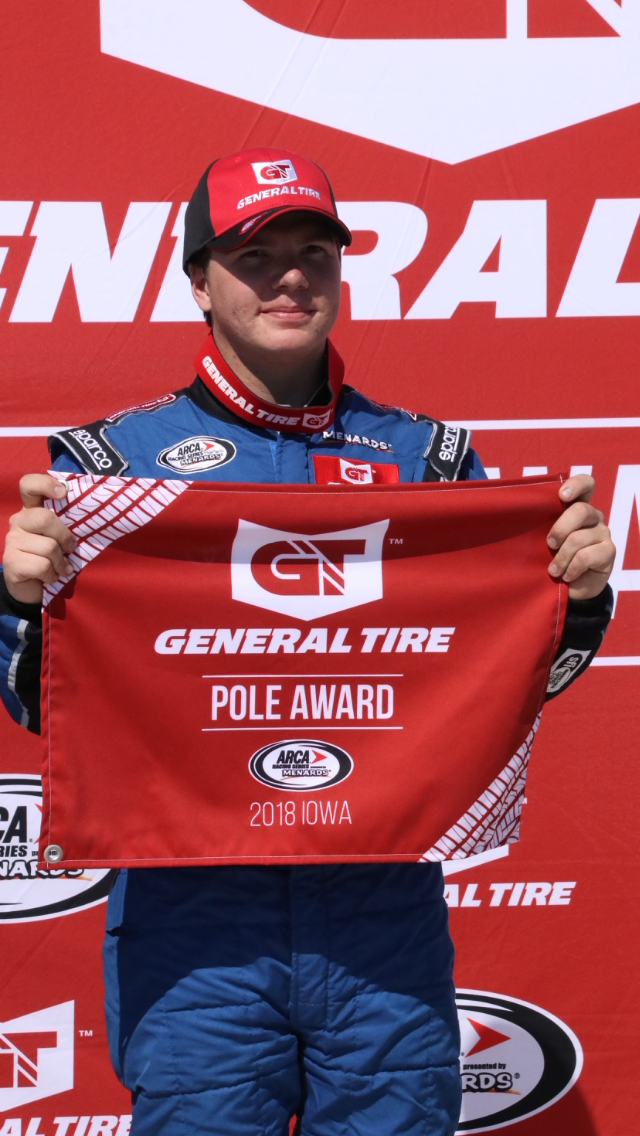 Sheldon Creed turned a lap of 23.982 seconds/131.349 miles per hour in the No. 28 United Rentals Toyota to earn his third General Tire Pole Award of the 2018 ARCA Racing Series presented by Menard season for Saturday’s Fans with Benefits 150 at Iowa Speedway. The pole is Creed’s third consecutive; he also earned the General Tire Pole Award at Gateway Motorsports Park and Chicagoland Speedway.

“Sometimes the driver has to get up on the wheel,” Creed joked after his fast lap. “Maybe we got lucky going early after Indycar qualifying. The sun didn’t have a chance to really bake their rubber down into the track and our General Tires had plenty of grip. We didn’t make a mock run in practice so that’s where the time pickup came from. We’re pretty happy with our racecar, we think we have a good long run car for tonight too.”

Riley Herbst qualified second with a lap of 24.102 seconds/130.695 miles per hour in the Joe Gibbs Racing No. 18 NOS/ORCA Coolers Toyota, with last week’s winner at Chicagoland Michael Self third in the No. 55 Sinclair Lubricants Toyota. Chase Purdy and Zane Smith rounded out the top five.

Harrison Burton, Chandler Smith, Christian Eckes, Bret Holmes and Sam Mayer will round out the top ten starters. For Chandler Smith, it marks the first time in his series career that he will not start a race from the General Tire Pole; he started all four of his previous series races from the pole position. He won in his last series start at Madison.

Home state favorite and 2014 ARCA Racing Series champion Mason Mitchell was unable to make a qualifying attempt after he diagnosed an engine vibration. His Mason Mitchell Motorsports team is swapping out engines and he will start tonight’s 150-lapper from the tail of the field.

Tonight’s Fans with Benefits 150 at Iowa Speedway will go green at 9 pm ET/8 pm CT. ARCARacing.com will have live timing and scoring as well as in-race updates for registered users; the race will be televised on MAVTV on Saturday August 4 at 10 pm ET.