Fireworks Light up the Night at Bojangles’ Summer Shootout 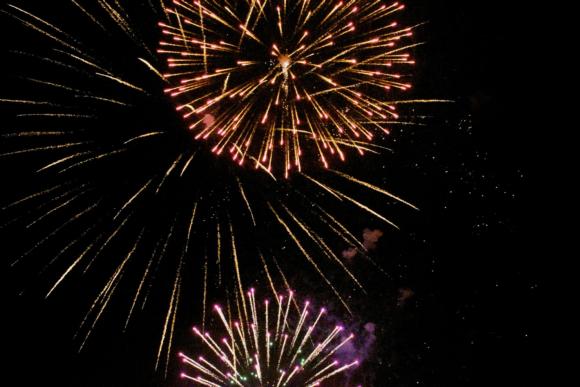 Fireworks lit up the sky, Legend Cars and Bandoleros traded paint and fans roared during an action-packed Tuesday night of Bojangles’ Summer Shootout racing at Charlotte Motor Speedway. In addition to the colorful pre-Fourth of July fireworks show – one of the most spectacular in the Carolinas – fans enjoyed an autograph session featuring racing’s future stars.

Green controlled the race’s first 10 laps before contact with points leader Robby Faggart saw both cars sustain damage. Each continued, but handling became an issue with Green – whose lead evaporated with a late caution period. Once the race restarted, Cormier pounced and drove away from Green and Faggart to register his second win of the season.

“I’m really very lucky,” Cormier said. “I was going to be patient. I kind of stayed back. I saw Green’s car get a little bit of damage and it was affecting his handle. The key was to just take advantage when he slipped. Last week, we had a great car and we made a mistake we shouldn’t have made. This week, we didn’t have that.”

Dawson Cram scored an emotional Legend Car Pro division win, the first for the Bojangles’-sponsored driver. Cram took the point at the start and never looked back, leading Hudson Halder and Sam Mayer to the finish line to register a long-awaited victory.

“Farbo Motorsports gives me a great car week in and week out and it’s nice to finally get a win,” Cram said.

Gracie Trotter withstood a furious challenge from D.J. Canipe, Tristan Love and Sammy Smith to win a hotly contested VP Racing Fuels Semi-Pro feature. Canipe and Smith traded the lead for the first half of the race, but Trotter moved into second with nine laps to go and got the upper hand in a back-and-forth battle with Smith to register her first win of the year.

“It was really exciting,” Trotter said. “I got hit early on and I thought the front was knocked in, but it actually started handling better. It feels great to win.”

Jak Crawford snared his first K1 Speed Young Lions win of the season, keeping Isaak Love and Bryson Ruff behind him in an impressive opening to his Bojangles’ Summer Shootout season.

“It feels good to win here,” Crawford said. “The car ran really good. We’ve been working for this for the past six months.”

Garin Mash snapped Justin Gareis’ seven-race win streak in Charter Schools USA Bandolero Outlaw competition with an assist from Josh Speas, whose door-to-door battle for the lead with Gareis in the closing laps led to both cars fading from contention for victory.

Mash managed to hold off Blaise Maddox by a scant 0.16 seconds to score an impressive win.

“”At the beginning I said I was going to make it to the front and I kept my word,” Mash said. “It kind of got a little rough there at the end, but you have to do what you do. It feels great to win. Justin did a great job of keeping his streak up.”

Zack Miracle scored a stirring victory in the Bandolero Bandit feature. Landon Rapp led the way for a majority of the race, but Rapp was nudged out of the lead with four laps to go, paving the way for a battle between Miracle and Kade Brown. Miracle crossed the line first ahead of Brown, Lucas Vera, Adam Eades and Jaiden Reyna.

Luke Morey prevailed over Alex Meggs and Sean McElearney in a makeup Beginner Bandit feature delayed from June 26. Meggs turned his fortunes around in the second feature, scoring a convincing win over McElearney and London McKenzie.

Following NASCAR ROVAL™ Test Fest – a free test among Monster Energy NASCAR Cup Series teams on the ROVAL™ from 9 a.m.-5 p.m. on July 10, the Bojangles’ Summer Shootout gets its own portion of NASCAR stardom. Next Tuesday, race fans in attendance can check out a driver autograph session featuring NASCAR standouts Chris Buescher, Daniel Hemric and Noah Gragson from 5:30-6 p.m. on the speedway’s concourse. Race fans who attend Test Fest will receive a voucher for a free ticket to the Bojangles’ Summer Shootout.

TICKETS: Tickets, which cost only $8 for adults and are FREE for kids 13 and under, can be purchased at the gate or in advance by calling 800-455-FANS or online at www.charlottemotorspeedway.com/tickets.