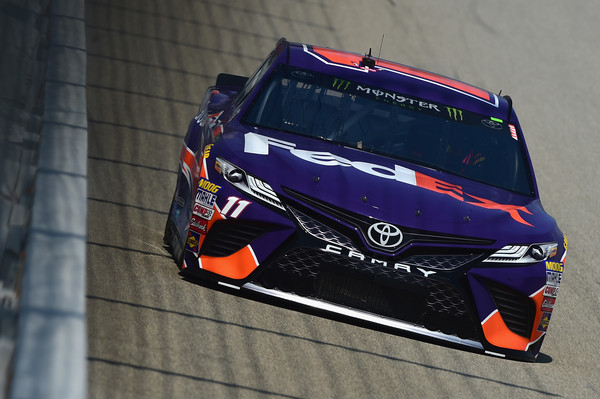 Denny Hamlin finished seventh in Sunday’s NASCAR Cup Series race at Chicagoland Speedway, battling back from a last-place starting position and late-race spin to notch his 10th top-10 finish of the season in the #11 FedEx Express Toyota. Hamlin lined up 19th for the final restart and charged through the field over the last 50 laps to salvage a strong day in the event.

Hamlin started last after post-qualifying inspection revealed an infraction, disallowing his fourth-fastest lap in time trials. He quickly worked to the front to finish Stage 1 in 11th place. He maintained the track position during the race’s midpoint and finished ninth in Stage 2. However, while racing the top groove with 90 laps to go, Hamlin lost control and went spinning off Turn 2. He did not incur any damage, but had to pit for tires and restart 26th. One more caution allowed Hamlin to get four more fresh tires for the last stint, and he was able to make up 12 spots by the checkered flag.

Delivering for Good: Hamlin will be running a special #11 FedEx Cares Toyota this weekend at Daytona International Speedway that will feature Team Rubicon, a veteran-led disaster response organization comprised of more than 80,000 volunteers who provide immediate relief following natural disasters and humanitarian crises. As a part of this weekend’s program, Hamlin, Crew Chief Mike Wheeler and the #11 FedEx Racing crew will participate in a Team Rubicon Disaster Response Training exercise in the infield at DIS on Friday in advance of the Coke Zero Sugar 400. FedEx supports Team Rubicon’s mission through the company’s FedEx Cares global giving initiative through which FedEx is investing $200 million to more than 200 communities around the world by 2020.

Delivering Laps for FedEx Cares: This season, FedEx is tying the performance of the #11 FedEx Toyota on the track to its efforts to improve road safety through a new program, Delivering Laps for FedEx Cares, by donating $111 for each lap Hamlin leads and $11,000 for each race victory to Safe Kids Worldwide, a nonprofit working to protect kids on the road, at home and at play. FedEx will also contribute $111,000 to Safe Kids if the #11 team wins the 2018 NASCAR championship. New for the 2018 season, the Denny Hamlin Foundation will also match the total donation to Safe Kids Worldwide.

After 17 regular season races, Hamlin has led 239 laps resulting in a $26,529 donation to Safe Kids Worldwide which will ultimately be matched by the Denny Hamlin Foundation. Fans can track the total amount donated to date from the Delivering Laps for FedEx Cares program on the homepage of FedExRacing.com.

What does it mean to you to have Team Rubicon on board the #11 FedEx Cares Toyota this weekend?

“It’s an honor to showcase Team Rubicon on our #11 FedEx Cares Toyota this weekend, especially in Daytona where their team helped respond after the devastating hurricanes last year. Obviously, July 4 weekend is a time where everyone recognizes our military members, and Team Rubicon is a veteran-led organization, making this weekend that much more special to us.”

Team Rubicon Along for the Ride at Daytona: In addition to being featured on the rear quarter panel of the #11 FedEx Cares Toyota, Team Rubicon will be recognized on Hamlin’s Toyota Camry with their letters “TR” on the b-post at Daytona.