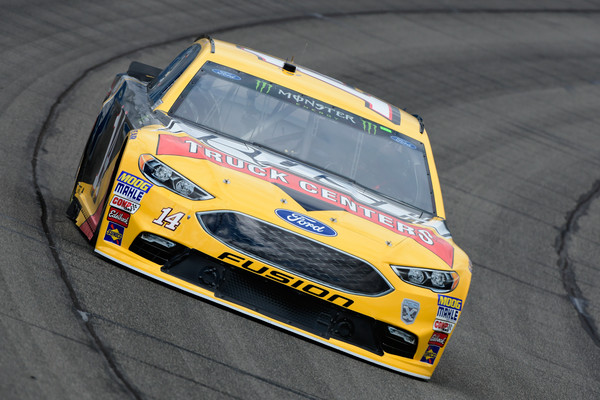 Life is fun for No. 14 Rush Truck Centers Ford Fusion driver Clint Bowyer these days, and he’s doing his best to share that fun throughout the Monster Energy NASCAR Cup Series with teammates, fans, tracks and his corporate partners.

Bowyer has always been a lively character, but his 2018 success that includes two victories, six top-fives and 10 top-10s has brought him to the forefront as one of the sport’s most sparkling personalities. The Emporia, Kansas, native is sixth in the standings at the season’s halfway mark, and he has cemented a role with the four-car Stewart-Haas Racing (SHR) team that has won seven races and scored 22 top-fives and 40 top-10s in 2018.

“It is a ton of fun to be able to win at this level of auto racing,” said Bowyer, who travels this week to Daytona (Fla.) International Speedway to compete in Saturday night’s 60th annual Coke Zero Sugar 400. “It is a dream come true to compete at this level, and once you are sitting in victory lane and you’ve beaten the best of the best, there is no feeling like it. To be able to share that with the men and women of Stewart-Haas Racing in victory lane, there is absolutely no gratification like that.”

Bowyer hopes to share that feeling with Daytona race fans as well this weekend. He and Daytona President Chip Wile created a “BBQ, Brews and Bowyer” ticket package that’s right down the alley of any Bowyer fan. The special package, $149 per ticket for adults and $69 for children 12 and under, includes food, beverages, Kansas City-style BBQ and Coca-Cola products in a Midway suite, along with a reserved seat and a visit by Bowyer before the race Saturday night.

Why would a driver agree to such an event minutes before racing at 200 mph on the high banks of Daytona? Bowyer said events like this are a key to success for NASCAR in the future. He’s learned this through his experiences in short-track racing as well as through attending team sports as a fan.

He sees NASCAR trending in the right direction, giving as much thought to the on-track product as well as what goes on in the grandstands and fan zones.

“I think (NASCAR’s) product is as good as it has ever been,” Bowyer said. “That is not an argument – the racing is better than it has ever been. Our tracks, they put on a show. They put on a party. They put on an event. It is not just those racecars on the track that put on that event. You have to be able to entertain the people, our fans, all weekend long. If you are going to invite them to the racetrack, you have to be able to put on a show and have them come back to their families and friends with memories and moments that they remember.”

It’s fitting Bowyer’s No. 14 Ford will carry the Rush Truck Centers paint scheme again this weekend in Daytona. Rush Truck Centers has been the primary partner on the No. 14 team since Bowyer arrived at SHR in 2017 and has been with the organization since 2010.

The Texas-based company has used Bowyer and the team to appeal to NASCAR fans as one way to recruit the technicians it needs to operate the largest network of commercial truck and bus dealerships in the country, with locations in 22 states. According to Rush Truck Centers, the trucking industry is expected to need 200,000 diesel technicians over the next 10 years to keep up with maintenance demands. Rush Truck Centers wants to make NASCAR fans aware of these opportunities and knows that, with Bowyer’s background, he is the right guy to help get the message out.