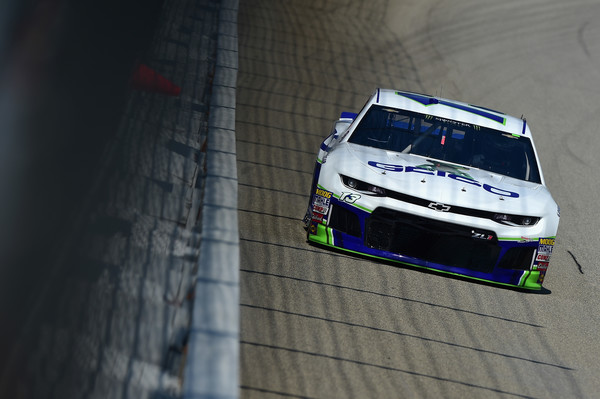 A week removed from having a top-15 run interrupted by a transmission issue at Sonoma Raceway, young gun Ty Dillon blew into the Windy City looking to rebound. Despite the debilitating heat, the Germain Racing team was on the right track from the moment they unloaded the No. 13 GEICO Camaro ZL1 at Chicagoland Speedway.
While the temperature hovered around the 108-degree mark, Dillon and his GEICO Camaro looked quick when they ended the weekend’s opening Monster Energy NASCAR Cup Series practice session 24th on the board. Moments after final practice got underway later in the day, the youngster reported, “Those changes definitely helped. We need to go another step in that direction. It helped the fall off quite a bit. If we can get this thing turning better on center-exit, it’s going to be pretty good.” Crew chief, Matt Borland, took good notes and made the requested adjustments, resulting in a productive final practice session that saw Dillon and his GEICO machine shoot up the board and finish up 13thfastest.
Dillon and the No. 13 GEICO Camaro ZL1 would roll off of the starting grid from the 25th position when the green flag set the field underway amid bright sunshine and blistering heat on Sunday.

He promptly picked up a position and moved into 24th in the opening laps, but his charge continued and Dillon found himself running in the top-10 just 43-laps into the race.

Typically flawless on pit road, Dillon was assessed his first speeding penalty of the year while exiting after a scheduled green flag stop on lap 112. “Sorry, guys, I didn’t even think I was pushing it,” Dillon said. The Germain Racing crew was equally confused and frustrated by the penalty and would dispute the assessment with NASCAR. Despite their best efforts, Dillon would be forced to deliver his GEICO Camaro ZL1 to pit road six laps later to serve the pass-through penalty. The questionable penalty left the team at a three-lap deficit and they would spend the balance of the race attempting to recover from the setback.
When the checkered flag closed out 267-laps of racing, Dillon was handed an undeserving 28th place finish.
“We still have some work to do on our intermediate track program. Our team has certainly had some good moments this year, like our 13th-place finish at Texas, but today was a struggle for our GEICO Camaro ZL1 team,” Dillon said following the race. “It’s so hard to take notes from one mile-and-half to another because a lot of them are in different stages of a repave from recent years. We are going to keep working at it though. Continuing to build and improve takes hard work, and this team certainly isn’t scared of putting in that time and effort.”
Dillon and company will now head to the high-banks of Daytona for race number 18 of the Monster Energy NASCAR Cup Series season.
Ty Dillon and the No. 13 GEICO Military Camaro ZL1 will hit the track at Daytona International Speedway for the weekend’s opening practice session on Thursday, July 5th, at 2:05 PM (ET). Qualifying will follow on Friday at 4:10 PM (ET).
The Coke Zero Sugar 400 Monster Energy NASCAR Cup Series race is on Saturday, July 7th, and it will be televised live on NBC beginning at 7 PM (ET). The Motor Racing Network (MRN) will carry the live radio broadcast, along with SiriusXM NASCAR Radio, channel 90.
PMI PR/Photo Credit Jared C. Tilton/Getty Images
Post Views: 403

A Bittersweet Second for Harvick at Bristol