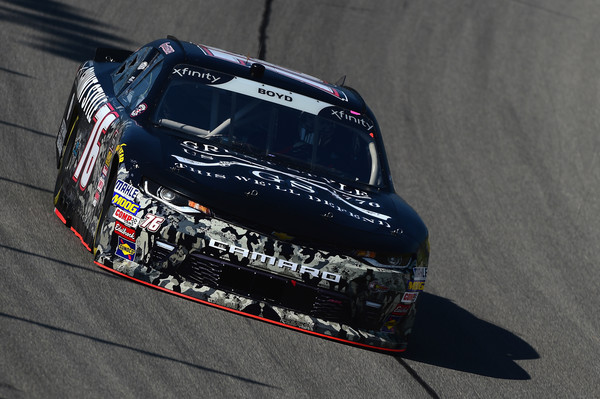 After a weekend off, the NASCAR Xfinity Series made a stop in the Windy City of Chicago for their fifteenth race of the season yesterday. This race also marked the beginning of the Summer stretch as it was the first of fifteen races in a row. Extremely high temperatures would play a major factor throughout the weekend for drivers and teams.

Boyd and team came into Chicagoland Speedway holding their heads high after several solid races for Bobby Dotter and SS Greenlight Racing. After being a bit off in qualifying, Boyd would roll off from the 36th position.

As the green flag flew Boyd went to work. It only took him about 8 laps to gain six positions on track. Boyd quickly found himself running in the 30th position and looking for more. The first two stages were uneventful with cautions only being displayed at the end of each stage.

The action picked up on lap 99 in the final stage, when the 16 of Ryan Reed made contact with the 3 of Jeb Burton, also collecting the 9 of Tyler Reddick. New spotter, Chris Monez, guided Boyd through the carnage without a scratch to the Grunt Style Chevy. Boyd came into the pits to top off on fuel during the caution.

A few laps after the restart, Boyd radioed to the crew that he was experiencing a terrible vibration in the right rear. A piece of debris off the 16 car went through the car and broke the right rear shock bracket. The debris also cut Boyd’s right front tire down, which caused him to spin around. NASCAR did not throw the caution, forcing Boyd to limp back to pit road still under green flag conditions. The flat tire peeled back the right front fender like an open can.

The broken shock forced Boyd to go behind the wall on lap 114 of 200. Where most would have hung their head in defeat, this team did no such thing. Led by Crew Chief Jason Miller, the team scurried around the car making the needed repairs to the wounded Grunt Style Chevy. Hard work, determination, and a never quit attitude brought Boyd back on track where he picked up 3 positions before ultimately finishing the race in the 29th position.

After the race Boyd reflected, “We definitely did not have the day we were looking for. We were just a little bit off all weekend and didn’t quite have the speed we really wanted. I thought we were getting better as the race went on, but then that debris really hurt us. It looked like something came off the 16 in front of me, which caused us to have a flat and broke the right rear shock as well. I can’t say enough about my guys though. The determination and pure grit they had to get me back out there speaks volumes to what we’re all about. There will always be adversity in racing and in life, but it’s how you respond to that adversity that shows the type of person you are. We’re going to go to Daytona and have some fun now.”

After race fifteen of thirty-three, Boyd sits 26th in driver standings. Boyd will take a few days to recover from the grueling heat of Chicago and begin to focus on Daytona. The Coca-Cola Firecracker 250 from Daytona will be run under the lights Friday July  6th. Boyd previously finished 25th at Daytona for the season opener and will look to improve even more this weekend.