Menard Rolls To The Pole At Chicagoland 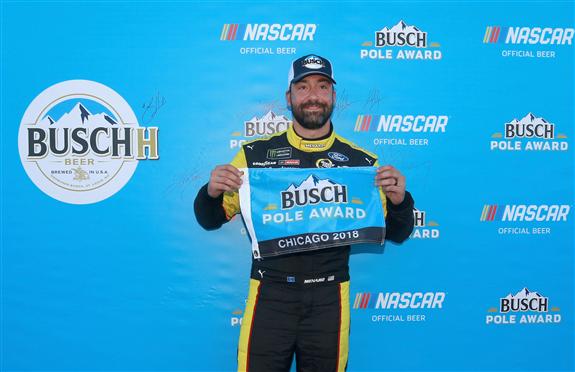 On a sweltering afternoon at Chicagoland Speedway, Paul Menard and his No. 21 Menards/Sylvania Ford Fusion turned up the heat in qualifying and won the pole with a lap at 180.102 miles per hour.

It was Menard’s second career Cup pole, the first coming in July, 2008, at Daytona International Speedway. It was the 119th for the Wood Brothers team and their first since last fall at Phoenix Raceway.

Menard and the Menards/Sylvania team posted mediocre speeds in the two practice sessions on Saturday, posting the 15th fastest speed of 176.102 mph in the first session and the 24th best speed in Happy Hour with a lap at 173.249 mph.

Then in qualifying, Menard sped to the top of the speed chart in the first of three qualifying rounds with a speed of 180.120 mph.

He was seventh fastest in the second round, then won the pole in Round Three.

“My guys did a hell of a job today,” said Menard, who rehydrated with pickle juice after running the Xfinity Series race prior to qualifying. “We weren’t very good in practice. We did a mock run that was so loose that we had to abort it and never really got a true mock run.

“We had speed and all through those rounds we got a little too loose in Round Two, and we adjusted for it.

In recent qualifying sessions Menard and the No. 21 team have often been fast in the first round only to struggle in the second. At Chicagoland, they maintained their speed through all three rounds.

“I just hit my marks and [crew chief] Greg [Erwin] and the guys made good adjustments,” Menard said.

Menard went on to say that the pole at Chicagoland is another sign that he, Erwin and the No. 21 team are continuing to improve in their first season together.

“All the Fords have been fast all year,” he said. “We have been on the back side of that with the 21 and playing catch-up a little with a new group of guys that have never worked together before.

“We are all learning each other, and I am really proud of all of them. We had a good test in Indy earlier this week and learned some things. Not that this is applying much from Indy but we have a little momentum going.”

Among those congratulating Menard was the team’s previous driver, Ryan Blaney, who will start alongside Menard in his No. 12 Ford from Team Penske, which shares an alliance with Menard and the Wood Brothers.

“I hate to lose the pole, but if I have to lose it to anybody it is cool to lose to my former team,” Blaney said. “The Wood Brothers and Paul have been good all year. It is cool that they got themselves a pole this year now.”

The Overton’s 400 is scheduled to start just after 2:30 p.m. Eastern Time with TV coverage on NBCSN.