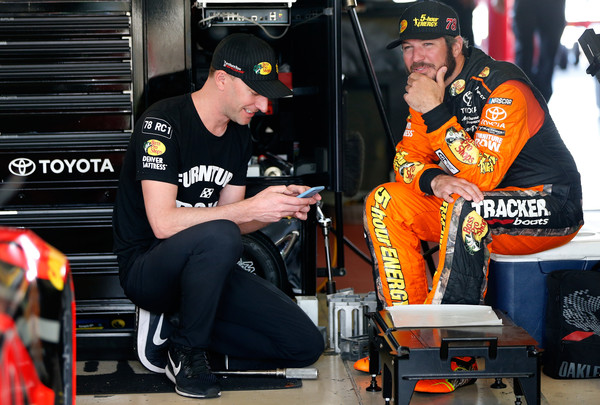 You can list Chicagoland Speedway as “my type of racetrack” for Martin Truex Jr., who will be seeking his third straight win at the 1.5-mile oval in Sunday’s Overton’s 400.
Truex overcame adversity in both wins at Chicagoland Speedway when it was the opening race of the NASCAR playoffs. He managed to come back from a deflating tire in 2016 and a speeding penalty in 2017.
“Yeah, I feel great about that — going for three in a row at Chicago,” Truex said. “A little sad it’s not kicking off the playoffs anymore just because of our record there, but at the same time, great racetrack and excited to go there and see what we can do. We had to overcome some issues the past two years at Chicagoland and hopefully we will have a clean race on Sunday and be there at the end in our No. 78 5-hour ENERGY/Bass Pro Shops Toyota.”
Right now Truex’s optimism level is pretty high after winning two of the last three races, including Sunday’s victory at the Sonoma Raceway road course.
“We had great runs in Pocono and Sonoma,” Truex noted. “But overall we have a much better handle on our race car and feel that we can contend on any type of track.”
Truex, who has 18 career wins (16 since joining Furniture Row Racing in 2014) has won at 12 different NASCAR Cup Series tracks and has scored more than one victory at six different tracks.
“This team is all about talent, heart and passion,” Truex said. “They keep on bringing me fast race cars and Cole (Pearn, crew chief) has made a couple of great calls at both Pocono and Sonoma. We just need to keep on improving because I know the other contenders are not going to sit still.”
Speaking of Pearn, he has been the crew chief for Truex’s 16 wins with Furniture Row Racing and was the lead engineer for the team’s first victory with Regan Smith at Darlington Raceway in 2011.
Pearn is one of four team members who has been at the track for all of Furniture Row Racing’s 17 career wins. The others are: Joe Garone (president), Nick Kerlin (shock specialist) and Clayton Hughes (spotter).
Since taking over the crew chief role in 2015 Pearn ranks second among crew chiefs during this time period with 16 wins, two shy of Adam Stevens’ (Kyle Busch’s crew chief) 18 victories.
Truex enters the 267-lap Chicagoland race with three wins and 10 top-five finishes in the first 16 races of the season. He is fifth in overall driver points and third in the playoff standings.
Truex’s career record at Chicagoland Speedway includes 12 starts, two wins, two top fives, four top 10s and 176 laps led. His average starting position is 14.2 and average finish is 13.8.
FRR PR/Photo Credit Brian Lawdermilk/Getty Images