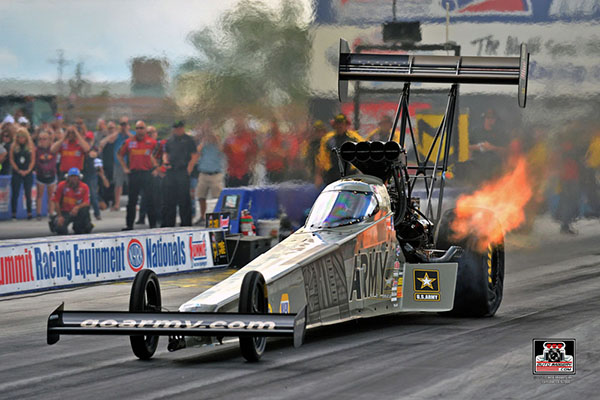 Schumacher and his U.S. Army Dragster team for Don Schumacher Racing (DSR) posted runs within a thousandth of a second Friday and today while Mother Nature washed out the second session both days. After running a lap of 3.792 seconds at 330.63 mph Friday, the eight-time world champion followed that with a pass of 3.793 seconds at 329.02 mph Saturday afternoon. “The Sarge” has now qualified inside the top-five for 11th consecutive events and will face Kyle Wurtzel in the first round Sunday.

“We were trying to run a little quicker today, but I’ll take that lap any day of the week,” said Schumacher, the 2007 Summit Racing Equipment NHRA Nationals winner. “We went right down the track. The (data) lines look beautiful. Everything about the U.S. Army car is perfect. All the parts are good. We understand it’s not supposed to be cloudy and cool tomorrow, so that particular run is going to play right into our hands. Bottom line is that I don’t care what kind of weather we have tomorrow because I know I’m surrounded by an incredible team. Mike Neff and Phil Shuler are bad to the bone and we’re going to come out tomorrow and play the game.”

Brown and his Matco Tools/U.S. Army Dragster for DSR, who is seeking his first victory of the season, posted a run of 3.822 seconds at 327.27 mph this afternoon to solidify his grip on the fifth position. The 2014 Norwalk champion will face Blake Alexander in the opening round, a rematch of the Atlanta first round earlier this season. Brown has a 9-1 career record in 10 previous first rounds in the Summit Racing Equipment NHRA Nationals.

“We can get down the racetrack,” said Brown, who will chase his 50th career Top Fuel triumph tomorrow. “We learned today that we need to be just a little more aggressive on the starting line. The Matco Tools/U.S. Army/Toyota boys are excited. Mark (Oswald) and Brad (Mason) are biting back at this track that has a lot of teeth. This is a fun event and we have such great support here being in Matco’s backyard. The direction we are heading is a good one and tomorrow is going to be a battle.”
Pritchett and her FireAde/U.S. Army Dragster for DSR climbed into the top half of the ladder with her Saturday qualifying run of 3.838 seconds at 324.98 mph and will take on Doug Kalitta in the first round. Pritchett lost to Kalitta in the second round in Richmond two weeks ago. She has not lost in the first round at Norwalk in two previous events and has eight wins in the first round this season.

“We were really looking forward to getting that final session in today,” said Pritchett. “We’ve been working through some data issues and feel like we had a handle on them heading into the final session. We made a lot of changes after our first run today, but Mother Nature had other ideas and we didn’t get another chance today. Every run is important to us. All aspects matter. From the seat time to finding that baseline, every lap is critical. We were hoping to see where we were tonight, but we’ll just have to come back tomorrow and give it everything we have against Doug Kalitta. These guys are working extremely hard and I’m going to keep working on that tree.”