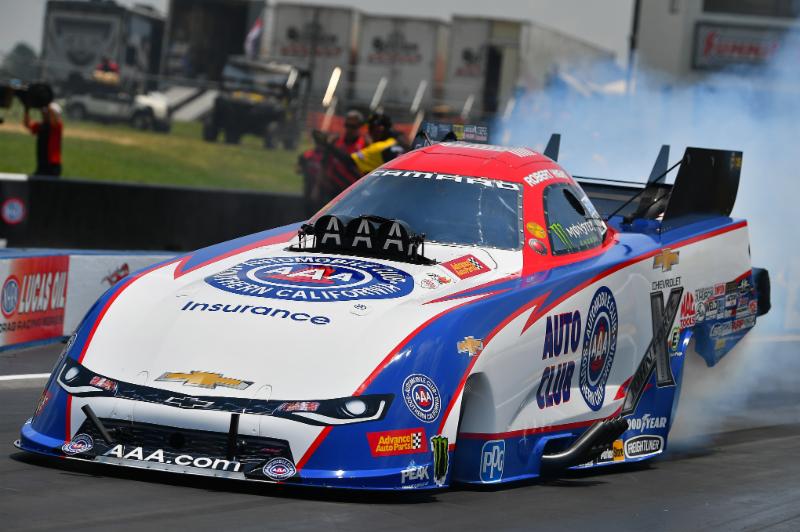 Robert Hight and the Auto Club of Southern California Camaro are heating up just in time for summer. The reigning and two-time Funny Car champion is heading back to the Summit Racing Equipment NHRA Nationals looking to seal the deal and pick up his first win at the race track outside of Cleveland. With two final round appearances to his credit including a runner-up finish last year, the crewman turned world champion is ready to get into the winner’s circle at Summit Racing Motorsports Park.
“We had a great race car last year in Norwalk and just needed one more win light,” said Robert Hight. “We were in the 3.90s all day and then just didn’t get a good run in the final. We have one of the fastest cars out here now and we are looking for just a little more consistency.”
This year John Force Racing and in particular Hight’s Auto Club Camaro, have been beasts on the performance side stacking up five top speeds and two low ETs of the race through eleven races. His teammate Courtney Force has owned almost all the other race performance numbers. Hight also has four trips to the final round including a break-out win in Chicago earlier this month.
“We went back to back with finals a couple of races ago. We were runner-up in Kansas and then got our first win of the season in Chicago. That was huge for us. It was hot and the track was tricky,” Hight said. “Everyone is battling the same track but when you get the win you know you have accomplished something. The past couple of races have been tough but we know where we are headed.”
Throughout his career at Summit Racing Equipment Motorsports Park, Hight has put on an amazing qualifying display. Since 2007 Hight has three No. 1 qualifiers and has qualified in the top three nine times.
The Auto Club team, led by crew chiefs Jimmy Prock and Chris Cunningham, has been fine tuning Hight’s Camaro Funny Car in an effort to manage the horsepower this 11,000 Nitro Funny Car creates. The tracks in the summer are hot and slick leaving little room for error on the tuning or driving side.
“Jimmy and Chris are constantly trying to bring out the best from this Auto Club Camaro. You have to be aggressive but you also have to be smart about the tune-up,” Hight explained. “There are times when you can really try and throw down a great number and then there are times you have to take what the track gives you. I have a lot of confidence in my crew chiefs and my crew guys.”
Hight has been travelling all month with his daughter Autumn, who also picked up her first junior dragster win of her career in Barona, California the weekend before Hight’s Chicago triumph. Last weekend, the pair hosted Malcolm Reed, famed pitmaster at the race in Bristol, to feed the Auto Club crew. It has been an eventful father daughter month and one that Hight is excited about continuing in Norwalk.
“It has been great to have Autumn on the road in June,” said Hight. “She loves to be at the races and I definitely think she is learning a ton from seeing all the work that goes into these race cars. She has grown up around it but, now that she is racing and winning she appreciates some of the behind the scenes action even more. I would love to pick up another win this month and share the winner’s circle with her again for sure.”
Qualifying for the 12th annual Summit Racing Equipment NHRA Nationals will begin with two session at 5:30 and 8:30 p.m. on Friday and two more sessions of qualifying on Saturday at 1:30 and 3 p.m. Final eliminations will begin at 11 a.m. on Sunday.
JFR PR/Photo Credit Ron Lewis