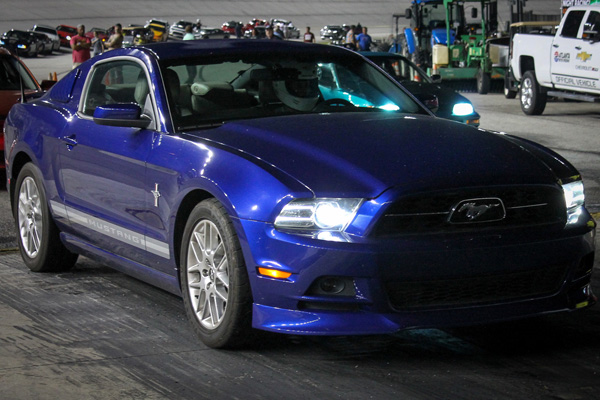 Atlanta Motor Speedway’s O’Reilly Auto Parts Friday Night Drags is a weekly gathering where anyone and everyone can come out and strut their stuff in street style drag races.

In a sport historically known for being predominantly male, the stage at AMS has changed over the years as women have started to fill up the competitor lists and take control of the strip.

Vicky Dillow, driver of the 1988 Mustang in the Street Performer Division, gave her thoughts on the change in the sport.

“I’ve been coming out here for 7 or 8 years now. I come out here for the fun of it, the joy, the people, the speed. That’s what it’s all about. It’s a family night for everybody.”

Dillow feels no pressure being a female in a still evolving sport, “I feel great about being in a “men’s sport” because I am the female driver! I have a great engine in a great car that has outperformed many of the cars and men out here.”

She further explained her motivation and competitive edge, “A lot of the guys here are old school and don’t want to be beat by a girl (laughs). That’s my motivation! I’m out her to show people that girls are just as good, if not better than men (laughs).”

Another driver who has taken Friday Night Drags by storm is Heather Utt. Utt is a passionate driver who looks forward to racing every week and putting the competition to shame.

Utt proclaimed, “Are you kidding me? There is nothing more fun than this. It’s great because win or lose it is always fun, but it’s most fun to win of course, I’m not going to turn that down.

When asked about what it’s like being a female driver in a pool which is majorly made up of men, Utt said, “I’m used to it, but the guys are used to me by now and so are the women. I’m at a pretty common place now.”

As new competitors gather to compete against the seasoned veterans, “May the best driver with the best car win”, says Heather Utt.

Entry to drag race or for the Show-N-Shine is just $20 or competitors can purchase a combo ticket for $30.

Spectator tickets are just $10, and children 5 and under are free.

More information can be found at www.atlantamotorspeedway.com/drags or by calling the Atlanta Motor Speedway Ticket Office at (770) 946-4211.