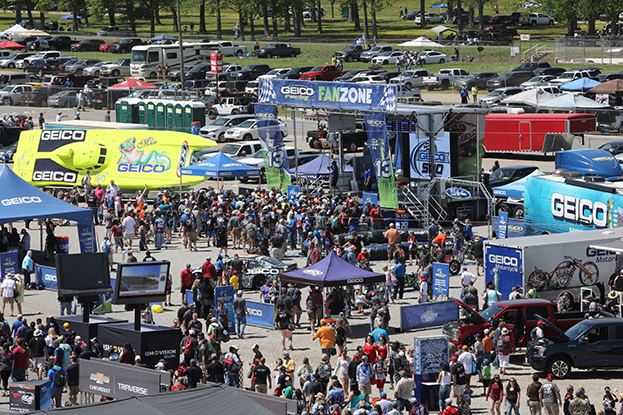 Fans attending Talladega Superspeedway this fall will experience a pivotal NASCAR Playoff doubleheader weekend (Oct. 12-14) for both the Monster Energy Cup Series (1000Bulbs.com 500) and the Camping World Truck Series (Talladega 250), which will also include “Free Friday” for those wishing to go in the grandstands.

Friday, Oct. 12
The weekend, which could play a major role in the outcome of both series season-ending championships, kicks off on Friday with practice sessions and qualifying for the Talladega 250. At 4 p.m. CDT, the grandstands (entrance at Gate EP4) will be open for fans to watch those time trials (two rounds of single vehicle laps that begin at 4:35 p.m. CDT) which will determine the starting lineup for Saturday’s Talladega 250. Three times in 12 truck races at TSS has the pole winner gone on to win the event. Again, admission is FREE and Gate EP4 opens at 4 p.m. CDT.

In addition to the qualifying, there’s much more for fans to do on Friday at NASCAR’s Most Competitive track. Those looking to “gear up” to showcase the support of their favorite driver and track can do so by visiting the Fanatics mobile units that will be in the Fan Zone, which will be open all three days, beginning at 9 a.m. CDT on Friday. Located outside the frontstretch near Turn 4, these shopping entities include a wide selection of merchandise of champion, veteran and “young gun” drivers. The Fan Zone also offers families a host of fun activities and music, as well as countless interactive exhibits. Returning to Talladega’s Fan Zone will be exciting events for everyone from partners’ Monster Energy, GEICO, Coca-Cola, Chevy, Honda Generators, Busch, Camping World and many more.

Several NASCAR Camping World Truck Series (NCWTS) drivers will sign autographs on Friday from 2-2:45 p.m. CDT in the Fan Zone (exact location TBD). The day concludes during the evening at 7 p.m. CDT with the track’s traditional infield “Big One on the Blvd,” an outrageous and fun event for infield camping guests, renewal guest ticket holders and fans with infield wristband admissions. NASCAR drivers will parade through the infield and then oversee some fun and over-the-top fan competitions. A total of 18 NASCAR drivers/personalities were a part of the “Big One on the Blvd” in the spring.

Saturday, Oct. 13
The Saturday lineup jumpstarts at 10:05 a.m. CDT as the stars of the Monster Energy NASCAR Cup Series (MENCS) hit the track for the first time with practice for Sunday’s 1000Bulbs.com 500. Later in the day, at 3:35 p.m. CDT, those same drivers will partake in Foodland/Food Giant Qualifying with two rounds of single-car trials to see who takes home the coveted pole position for the 1000Bulbs.com 500. On fourteen different occasions, a driver who has started on the pole has won a MENCS race at Talladega, with the latest being Ricky Stenhouse Jr. in the spring of 2017.

Sandwiched in between those activities for the 1000Bulbs.com 500 are 250 miles of nail-biting moments as the truck drivers tackle Talladega’s 2.66-mile venue in the Talladega 250 at Noon. Parker Kligerman is the defending champion of the event while Fairhope, AL’s Grant Enfinger captured the crown in 2016. The race will close out the Round of 8 in the NCWTS Playoffs and reduce the field of title contenders from eight to six at the checkered flag. If one of the eight eligible drivers wins, that competitor will automatically advance to the next round. Grandstand entry gates open for general ticket holders at 9 a.m. CDT.

Sunday, Oct. 14
Brad Keselowski, the defending champion of Talladega’s fall MENCS event, hopes to give Ford its seventh consecutive victory at NASCAR’s Most Competitive track in the 1000Bulbs.com 500, the second race (of three) in the Round of 12 in the MENCS Playoffs. The race is set for a 1 p.m. CDT start, but there are plenty of fan activities before the green flag, including the Fan Zone, the Kids VIP Experience Presented by Children’s of Alabama as well as Pre-Race VIP opportunities. Grandstand entry gates open for general ticket holders at 9 a.m. CDT.

While at the track for the incredible weekend of racing, it will be a must to visit the International Motorsports Hall of Fame (IMHOF). Located just outside of Turn 4, the IMHOF houses a huge array of classic race cars and historic memorabilia, showcasing all forms of motorsports. It will be open all race week, including NASCAR Playoff weekend.

For tickets or more information, visit www.talladegasuperspeedway.com or call 855-518-RACE (7223).