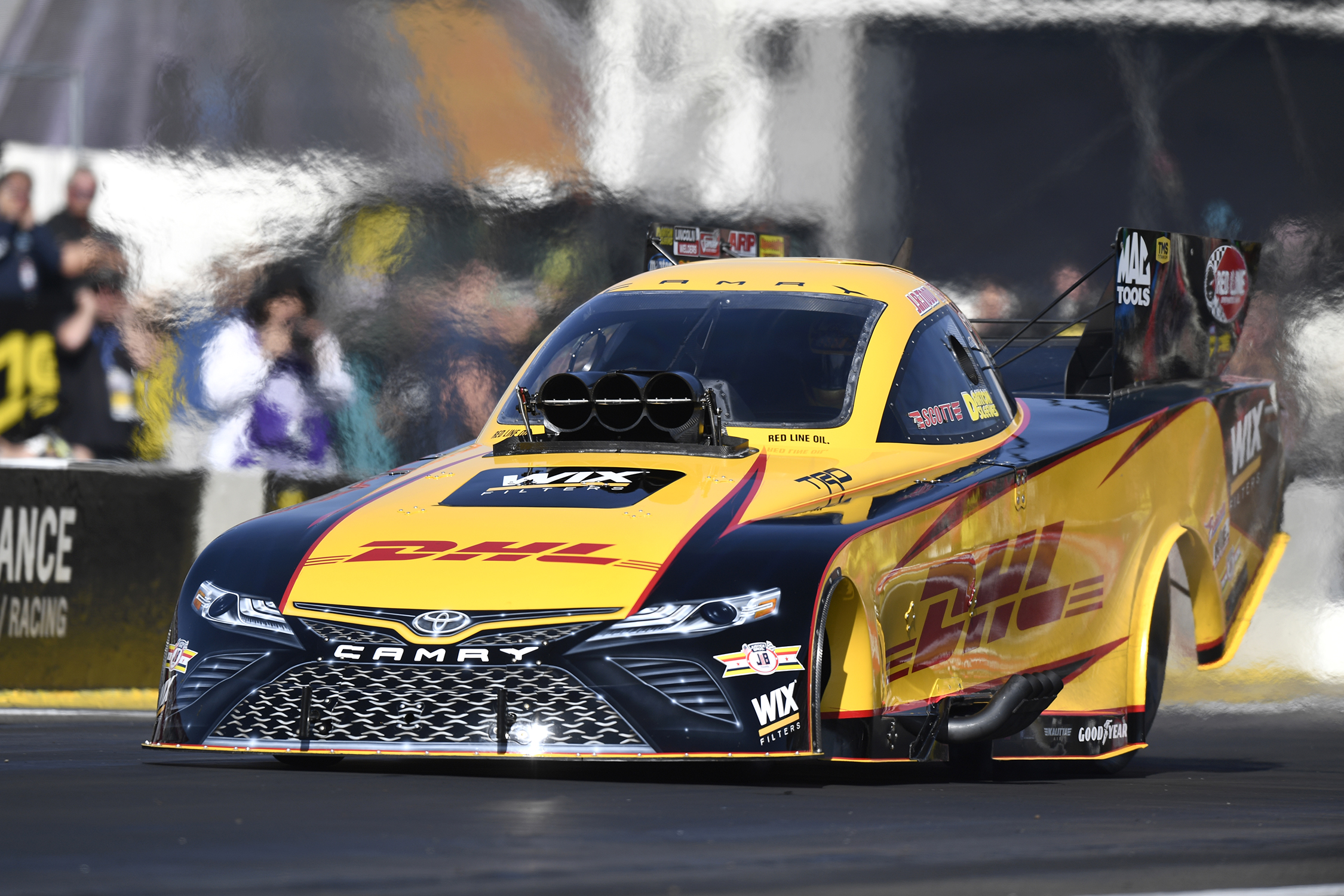 J.R. Todd drove his DHL Toyota Camry to the Funny Car semi-finals to lead Toyota at the Fitzgerald USA NHRA Thunder Valley Nationals at the Bristol Dragway Sunday. It was the fifth time in the last eight races that Todd has advanced to the semi-finals or beyond.
Todd defeated fellow Toyota driver Del Worsham in the opening round and then knocked off Jack Beckman in round two to set up a semi-final match-up with Ron Capps. Todd had the advantage at the light with a .034 reaction time, but dropped a cylinder at the 100’ mark, giving Capps the win.
“It was just a matter of going down the track today,” said Todd, as air temperatures soared into the 90s. “In the semis, I just dropped a hole right after I hit the gas and you’re a sitting duck at that point. It’s good to be going rounds and earning points in our DHL Camry, but it would be nice to be going even more rounds and earning more points on the cars in front of us. It’s going to be hot in Norwalk, but they have a brand new circuit. I’m sure it’s going to be tricky.”
Cruz Pedregon won in his first Funny Car run of the day, but smoked the tires in losing to Bob Tasca in the second round. With the round win, Pedregon jumped up to eighth in the points.
Shawn Langdon lost in the opening round to Beckman.
In Top Fuel, both Antron Brown and Doug Kalitta advanced to the second round before being eliminated.
Brown ran the quickest pass of the day in defeating Richie Crampton with a 3.897-second run. In the second round, Brown had the advantage at the light on Steve Torrence, but overpowered the hot track as track temperatures soared past 140 degrees.
Kalitta defeated Brittany Force in the first round, but spun the tires in a second round loss to Scott Palmer.

The Mello Yello Drag Racing Series closes out its four races in four weeks stretch next weekend at the Summit Motorsports Park in Norwalk, Ohio, with the Summit Racing Equipment NHRA Nationals, June 22-24.

2018 Toyota Wins (5)
Top Fuel (2): Doug Kalitta, Pomona; Richie Crampton, Gainesville
Funny Car (3): J.R. Todd,Las Vegas 4-Wide, Houston; Cruz Pedregon, Charlotte 4-Wide
Notes:
– J.R. Todd has now advanced to the semi-finals or better in five of the last eight races, including victories at both Las Vegas and Houston.
After 11 race of 18 regular season races, four Toyota drivers are on pace to qualify for the Countdown to the Championship playoffs. Both J.R. Todd (Funny Car) and teammate Doug Kalitta (Top Fuel) currently sit fourth in the point standings. Antron Brown is sixth in Top Fuel, while Cruz Pedregon climbed up to eighth in Funny Car.
Driver Quotes:
J.R. Todd, DHL Toyota Camry Funny Car: “It was just a matter of going down the track today. In the semis, I just dropped a hole right after I hit the gas and you’re a sitting duck at that point. It’s good to be going rounds and earning points in our DHL Camry, but it would be nice to be going even more rounds and earning more points on the cars in front of us. It’s going to be hot in Norwalk, but they have a brand new circuit. I’m sure it’s going to be tricky.”
Doug Kalitta, Mac Tools Toyota Top Fuel Dragster: “I love running at Bristol. I thought we had something going today, but I was just hanging on out there after the wheels started spinning. You just hope the other guy doesn’t go around you, but unfortunately it didn’t work out today. We’ve been working on a hot weather tune-up and I think we’re making some headway.”
Antron Brown, Matco Tools Toyota Top Fuel Dragster:“This is the hottest race track we’ve raced on so far this year. We made the necessary changes to slow it down, but the track was still really hot. With that said, we made it down there and we were just a little bit too fast. I’m very proud of my Matco Tools/U.S. Army/Toyota guys. They’ve shown a great work ethic and we keep gaining and getting better and better. One of our goals was to come in here and qualify in the top five and we did it in qualifying number three. We have the same goal for next week, we want to go to Norwalk and qualify in a top-tier spot. We just need to keep working on our whole package and making it better, including myself getting better. We stayed consistent this weekend and I felt pretty good. I’m just looking forward to the next race. I love the way we’re making gains and getting better and better. We dropped the low ET of the first round in some really hot and intense conditions. We’re just scratching the surface of what we’re capable of.
Cruz Pedregon, Snap-on Toyota Camry Funny Car:“We knew coming in that temperatures were going to be high, so we were mentally prepared. Our Snap-on Camry had the beginning of a great run in the first round. It was really fast, it just spun the tires and I recovered and we were able to get the win. In the second run, we just didn’t slow it down enough and basically did a duplicate of the first round. We know better and we didn’t do enough. We gained a lot of information for our summer track set-up, though. It’s very encouraging and the motor is starting to make good power now. So I’m looking forward to using what we learned here next week in Norwalk.”
Toyota Drivers NHRA Bristol Eliminations Round-by-Round