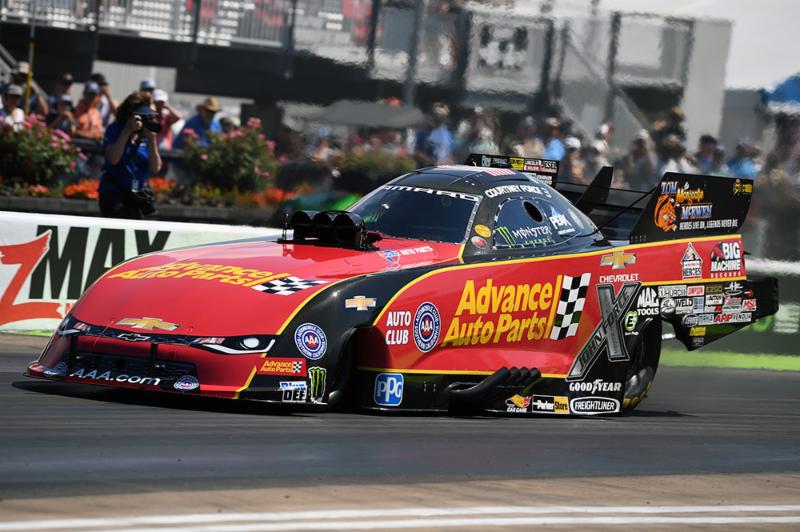 With 11 races completed so far this season, Sunday at the Fitzgerald USA NHRA Thunder Valley Nationals was only the third time in 2018 that John Force Racing did not have a nitro car to cheer for in the final round of a NHRA Mello Yello Drag Racing Series event. With Courtney Force finishing as a semifinalist, Robert Hight exiting in the second round and John Force and Brittany Force closing out their day in the first round, it will be the first time since the NHRA Four-Wide Nationals in Las Vegas, the fourth race of the season, that John Force Racing has not had at least one runner-up finish.
No. 1 qualifier Courtney Force had a solid 4.169-second pass at 307.65 mph to defeat Jonnie Lindberg in the first round on a hot and tricky track. Force was third quickest of the session and maintained lane choice heading into the second round against veteran driver Tommy Johnson Jr. Force had another clean pass at 4.197 seconds and 298.24 to defeat Johnson Jr. who smoked the tires to a 5.134 second pass. In the semifinals, Force kept with her consistency to run a clean 4.271-seconds at 286.62 mph but it wasn’t enough to advance over Bob Tasca III’s 4.219 seconds at 298.60 mph.
Force isn’t hanging her head low over the finish, however, if anything she’s even more encouraged by what her Advance Auto Parts team can accomplish, and by their lead in the NHRA Mello Yello points standings, a substantial 201 points over her closest competitor.
“Going from qualifying and not being able to get this Advance Auto Parts Chevy Camaro down (the track under power) in the heat to coming into race day and taking it all the way to the semifinals, it’s just a huge testament to what my team can achieve, especially under pressure,” explained Force, who qualified under the lights on Friday at 3.993 seconds. “It was just a great job. My guys just did awesome working on this car in the heat. I know it was brutal out here for them, but they got their job done. Brian Corradi and Dan Hood tuned this car and got us some rounds and helped us stay in that points lead. It was still a good day for us. We’ve learned a lot this weekend and we’re going to be ready to head to Norwalk, Ohio and another hot track.”
Reigning NHRA champion Robert Hight’s Father’s Day bid came to a premature end in round two against Ron Capps who, one round earlier, dispatched 16-time series champion and four-time Bristol winner John Force.
On a day on which close races were a rarity, Hight and Capps delivered a gem. Capps crossed the finish line in 4.208 seconds at 299.33 mph, just ahead of Hight’s 4.233 at 300.79 mph in the Auto Club of Southern California Chevrolet Camaro SS.
“It was a tough weekend,” Hight said. “Between the heat and the bumps (in the track surface), it was a real challenge not just for the crew chiefs, but for the drivers and crew, the fans, everybody.”
In the first round race, the Auto Club Chevy lost traction early but Hight was able to pedal and save it to get past Jeff Diehl with a time of 4.757 seconds.
“(The adjustments after round one) gave us a chance against Capps,” Hight said, “but being over there in the left lane, we just didn’t get it done. It’s not the Father’s Day I wanted, but it was still great to have my daughter Autumn, who just won her first Jr. Dragster race, out here with me.”
Capps would not have even had a chance to beat Capps had Force’s PEAK Coolant and Motor Oil Chevrolet Camaro SS not shaken and lost traction barely 200 feet off the starting line in round one.
Force, the sport’s biggest winner and an inductee into both the Motorsports Hall of Fame of America and the International Motorsports Hall of Fame, slowed from his 4.115 second qualifying pace to 5.824 seconds at only 128.57 mph.
Despite his unexpectedly early exit, the 148-time tour winner retained his Top 10 standing in a Funny Car class that has become the most competitive in the NHRA Mello Yello Series.
In Top Fuel, Brittany Force had the third quickest time of the first round but it came down to reaction time against Doug Kalitta. Force piloted her Advance Auto Parts Monster Energy dragster to 3.942 seconds at 307.51 mph, quicker and faster than Kalitta’s 3.998 seconds at 286.38 mph but his .030 reaction time gave him the edge over the reigning world champion.
“I always try to stay positive and upbeat about everything,” Force said. “What I’ve learned, especially from last year, is to take this run and learn from it. It’ll make me a better driver. My team brought a car that could win on race day and I didn’t give them a driver. So, we’ll go on to the next one and hopefully improve from there.”
The next stop on the NHRA Mello Yello Drag Racing Series season will be in Norwalk, Ohio for the Summit Racing Equipment NHRA Nationals at Summit Motorsports Equipment Motorsports Park June 21-24.
JFR PR/Photo Credit Gary Nastase, Auto Imagery

McMillen Looks Ahead To Next Week’s NHRA National Event