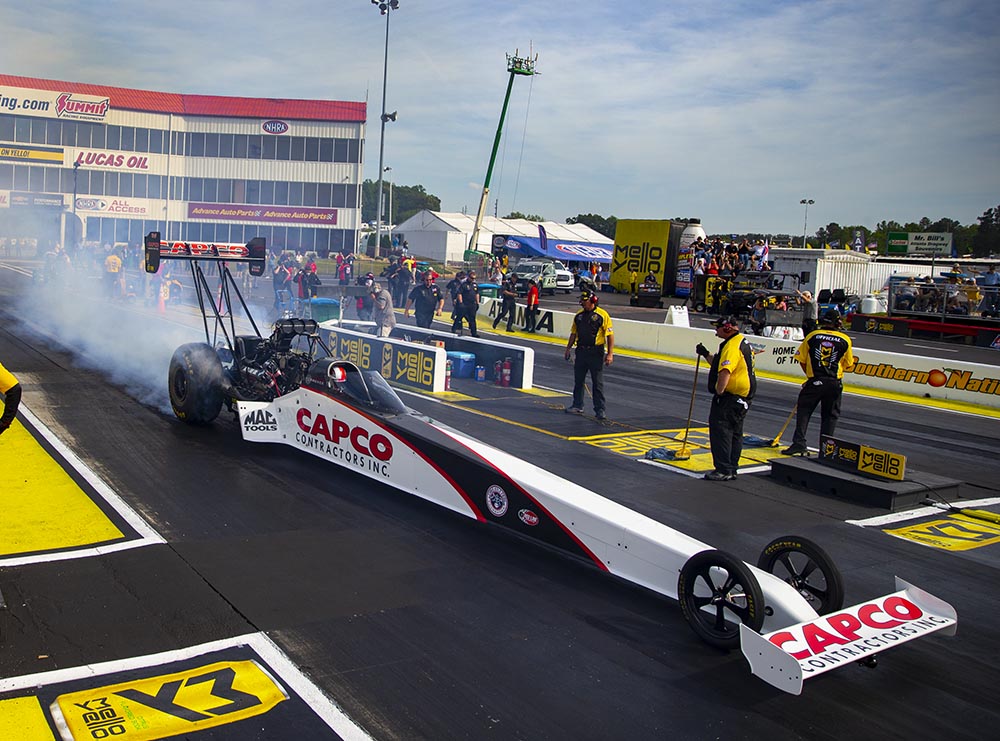 With apologies to Aesop and his tale of “The Tortoise and the Hare,” the only thing a “slow and steady” pace will assure at this week’s 18th annual Fitzpatrick USA Thunder Valley Nationals at Bristol Dragway is an early seat in the spectator grandstand.

In a sport the Greek fabulist could not have imagined 2,500 years ago, one in which Top Fuel dragsters routinely accelerate from zero to 330 mph in fewer than 3.75 seconds, success falls to those best able to combine the speed of the hare with the pace of the tortoise.

In the NHRA Mello Yello Drag Racing Series, it’s “fast-and-steady” that wins races and, over the last three seasons, no one has been faster and steadier than the Capco Contractors team anchored by driver Steve Torrence.

The 35-year-old Torrence, who overcame Hodgkins lymphoma to win the 2005 NHRA Top Alcohol Dragster World Championship, has emerged as the new gold standard in the sport’s ultimate category.

The current Top Fuel point leader has taken his 10,000 horsepower hot rod to the final round in 15 of the last 30 NHRA tour events, winning 12 including last week’s Virginia Nationals at Richmond, Va.

Third in points in 2016 and second a year ago, the talented Texan is determined this year to win the title that would make him the first ever to hoist an NHRA championship trophy in both the Fuel and Alcohol divisions.

Qualifying or eliminations, it doesn’t seem to matter to the Kilgore College alumnus. He has dominated both. In addition to winning more than a third of the races contested over the last two seasons, only once in the last two years has he qualified outside the Quick 8.

An avid outdoorsman, Torrence credits his success to a team led by crew chief Richard Hogan and car chief Bobby Lagana Jr. that has remained largely intact for the past four seasons.

“These Capco boys are the best out here,” Torrence said. “I’m driving my ass off because I know every time I go up there (to the starting line) I’ve got a car that can win. I don’t want to be the guy that’s the weak link in this deal, so it’s made me a better driver. My guys don’t want to let me down and I don’t want to let them down.

“So, we’re just gonna keep doing what we do. After last year (when he lost the championship in the second round of the final race of the season), we know how quick the wheels can come off so we’re definitely not taking anything for granted.”