Menard Rebounds From Pit Penalty To Finish 11th At Pocono 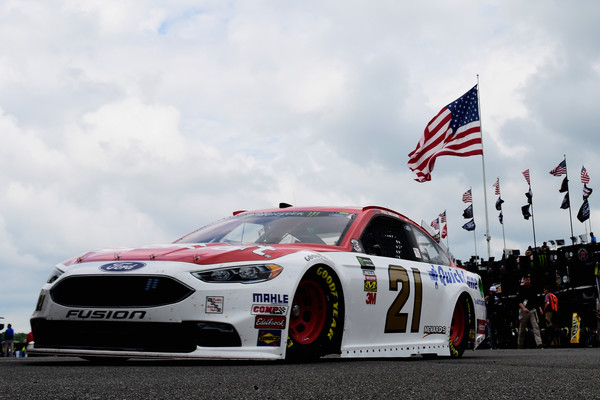 When the chips were down for the Motorcraft/Quick Lane team late in Sunday’s Pocono 400 at Pocono Raceway, driver Paul Menard and his spotter Stevie Reeves stepped up and salvaged the day.

Menard started 20thand ran among the top 15 and top 20 for most of Sunday’s 400-miler. But on a pit stop with 20 laps remaining, the team was penalized for an uncontrolled tire. Instead of restarting among the top 15, Menard was relegated to 27th place and was also positioned behind all the lapped drivers.

In the final 16 laps, Menard, with Reeves keeping him abreast of developments on the track, drove his way to an 11th-place finish.

Eddie Wood said Menard and Reeves deserve much credit for the late-race recovery.

“It was all on them,” Wood said. “Paul did a great job. There was a lot going on there at the end. He drove through two or three wrecks, and Stevie did a great job helping him get through there.”

Wood also said he was pleased to see a good crowd in the Pocono grandstands, especially on a weekend in which the weather forecast initially was discouraging for fans.

Eddie and his brother Len were grateful for a chance to visit at the drivers meeting with Dr. Rose Mattioli, the widow of Dr. Joseph Mattioli, who was Pocono Raceway’s founder and chairman of the board. Mrs. Mattioli remains the track’s Chairman Emeritus and her grandson Nick Igdalsky is the track’s Chief Executive Officer.

Menard remains 17thin the championship standings and is 30 points behind Ricky Stenhouse Jr., who currently holds the final spot in the playoff standings.