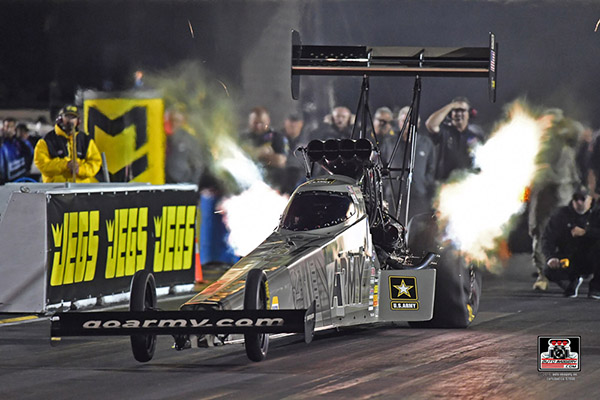 Schumacher and his U.S. Army Dragster team for Don Schumacher Racing (DSR) lost traction just about 400 feet into his first run and posted a lap of 4.532 seconds at 166.23 mph, but he opened the evening session with a lightning-fast run of 3.749 seconds at 329.99 mph. The five-time Route 66 winner climbed from 14th after the first session up to third on the provisional ladder with two sessions remaining tomorrow.

“We knew coming into tonight that this U.S. Army car had to go down the track,” Schumacher said. “We needed to make a good run and that one was impressive. Up in the lounge before the run, (crew chief) Mike (Neff) and (assistant crew chief) Phil (Shuler) said we were aiming to run a 3.74. And that’s what we were setting the car up for. In today’s first run, we were on an incredible pass trying to run a 3.77 and just missed it. The track conditions get better when there is more rubber down on the track. My U.S. Army guys knew what they wanted the car to do. We ran what we set the car up to run. When a car does what you want it to do, that is much more impressive than those miracle runs when you don’t have any idea how you got there. This is my home track and we are so proud to race here. We sure do need a win and it’s time to get after it tomorrow.”

Brown and the Matco Tools/U.S. Army Dragster for DSR made an impressive run to begin Friday by posting a lap of 3.801 seconds at 325.14 mph in the opening session, but lost traction early in his second pass finishing with a lap of 7.267 seconds at 91.68 mph.

“We are off to a great start,” said Brown, a three-time Top Fuel Route 66 winner. “Q2 didn’t go the way we wanted to, but in that first session we got right down the track. We’re building off of it. We got aggressive tonight and it didn’t stick. We are going to have great conditions tomorrow and this Matco Tools/U.S. Army team will not quit. We are evolving right now and adapting to the situation. We are getting better and that’s the main thing.”

Pritchett and her Papa John’s Pizza/U.S. Army Dragster for DSR, looking to earn a second No. 1 qualifier this season, was the fastest of the U.S. Army Racing trio in the opening session with her pass of 3.797 seconds at 328.30 mph, but she lost traction almost immediately in Friday’s second session and coasted to the finish with a run of 12.084 seconds at 76.43 mph.

“We started off with a nice solid pass today,” Pritchett said. “With the conditions we had tonight, it looked we could put the kitchen sink to it and that’s what we’ve got to do when the competition is this stiff. We just missed it a little bit. It was on the verge of being an awesome run. We were gunning for it. That’s what we do. Tomorrow we are going to have similar conditions and our goal is to find that window and operate right in between it. I’ve got all the faith in this Papa John’s Pizza/U.S. Army team. We’ll learn from tonight and get better tomorrow.”

The final two qualifying sessions are set for 4:30 and 7 p.m. EDT Saturday. FS1 will broadcast highlights of qualifying Saturday at 7 p.m. and Sunday at 10:30 a.m. Elimination rounds begin at noon Sunday with FS1’s delayed three-hour broadcast set for 5:30 p.m.