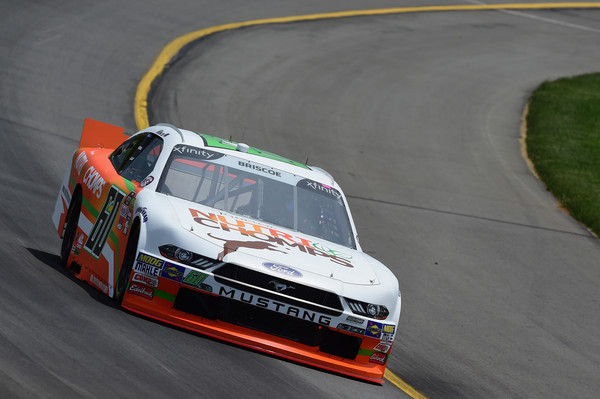 Chase Briscoe worked his way inside the top-10 Saturday afternoon at Pocono Raceway after starting 16th, but got caught in the path of another competitor’s accident, forcing him to settle for a 38th-place result in the Nutri Chomps Ford Mustang.

“The No. 5 got loose,” Briscoe said. “That was the second time it happened. We didn’t have track position all day long and we were finally going to be good I thought. We were up to seventh or eighth on that restart.

In his first career NASCAR Xfinity Series start at the ‘Tricky Triangle’, the Mitchell, Indiana, native was improving throughout the 100-lap race after finishing 16th at the end of stage one. After battling a loose in, tight center condition, the team went to work during the stage break with four tires and a chassis adjustment.

The changes seemed to help the Nutri Chomps Ford allowing Briscoe to pick up an additional two positions before the end of the second 25-lap segment.

After a pit-stop under the yellow, Briscoe began the final stage in his best position of the day, before Michael Annett’s machine slid up into the No. 60, forcing Briscoe hard into the outside wall ending his day early.

The No. 60 return to the track next Saturday at Michigan International Speedway with Briscoe behind the wheel. Race coverage begins at 1:30 p.m. ET on FOX and MRN.