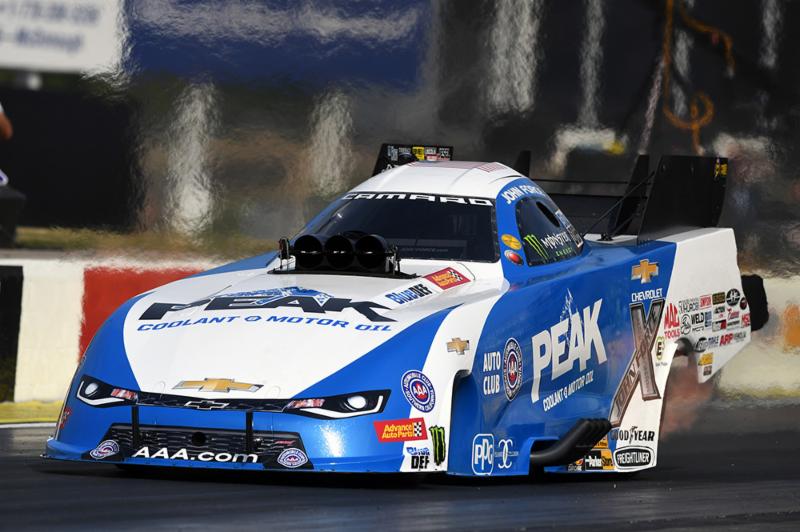 It would be fair to say that no other driver has performed better on track and with the fans than NHRA legend John Force. His racing accomplishments are without peer and he has signed enough autographs to fill the grandstands at the massive stadium style Route 66 Raceway dozens of times over. This weekend John Force will be on an even higher plateau as he races his PEAK Coolant and Motor Oil Chevrolet Camaro SS a handful of miles from PEAK’s corporate headquarters outside of Chicago.
Prior to getting on track at a facility he has racked up three Funny Car wins and six final round appearances, Force will take his entire racing team, including reigning Funny Car champion Robert Hight, reigning Top Fuel champion Brittany Force and current Funny Car points leader Courtney Force, to spend Thursday with the employees and customers of PEAK and parent company Old World Industries.
“This is the hometown for PEAK and Old World Industries,” Force said. “We are going to get into town early to go and see their new facility. All four drivers will be doing a big show there on Thursday. It is always great to have their customers and employees out at the races with their families.”
Force is looking to put on a good show for his PEAK teammates as well as the rest of the NHRA faithful that will be attending the JEGS Route 66 NHRA Nationals in Joliet. The 148-time winner has history outside of Chicago and has MADE history at the fast racetrack now heading into its 21st annual installment.
“I got a big win there a few years ago. I won my 87th Funny Car race in 2000 which was the record for most wins by a driver in NHRA history,” said Force. “I love the fans there. I believe my car is starting to turn the corner. We have been working smart to get a good tune up. The whole brain trust was involved a few races ago but now we are moving ahead.”
Starting a stretch of four races in four weeks might be a daunting task for some but the 16-time Funny Car champion relishes the challenge.
“We used to race for months at a time when I was getting started,” remembered Force. “National events. Match races. We raced them all. I like being on the road with my team and my family. I’ll have my daughters racing with me as well as all the fans on the ropes. They are all my family. They used to bring us sandwiches and cakes. I love everything about the NHRA and I love racing in Chicago. We are getting this program turned around and I am excited.”
The start of the 2018 season was tough with three explosions in the first three races. The daunting task of staying focused on the problem while also supporting teams and sponsors has kept Force’s energy level at an all-time high which is saying something for a driver that is known for “being on fire from here to Australia” and spending more time with the fans than most drivers on tour.
“I let the race car do the running for me,” explained Force. “We had some problems at the start of the season but we are racing hard and the competition has never been tougher. I still have some tricks up my sleeve and I have the support of great sponsors like PEAK, Auto Club, Advance Auto Parts, Monster Energy and Chevrolet. Chevy just won the Indy 500 with that Will Power kid who was in our pits in Charlotte. Maybe that will bring me some luck.”
Qualifying for the JEGS Route 66 NHRA Nationals will begin on Friday at 6 p.m. and 8:30 p.m. and continue Saturday at 3:30 p.m. and 6 p.m. Final eliminations will begin at 11 a.m. on Sunday.
JFR PR
Post Views: 166