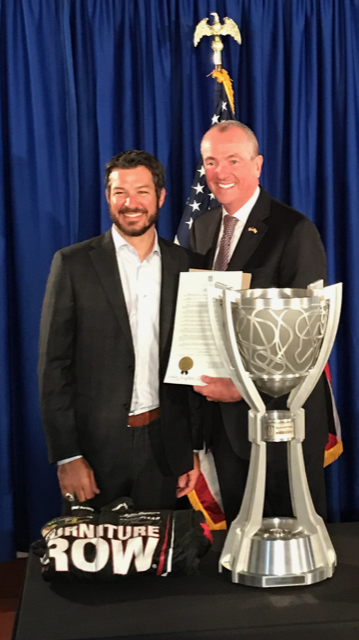 Truex, who was raised in Mayetta, N.J., took part in the festivities at the governor’s offices in Trenton, where he presented Gov. Murphy with an autographed race-worn Furniture Row Racing firesuit.

“Being from New Jersey and thinking about having my own day is pretty crazy so it was a big day for me,” said Truex. “It was a huge honor to be recognized by Gov. Murphy for Furniture Row Racing’s achievements as a team. I’m very proud to be from New Jersey and to be the first NASCAR Cup Series Champion from the state is pretty awesome, as well. All that made today very special.”

Truex began his racing career in New Jersey, starting with go-karts in 1991, moving up to modifieds in 1998 and winning the 1999 Turkey Derby Classic at Wall (N.J.) Township Speedway. He competed in the NASCAR K&N East Series from 2000-2003, winning five races and racking up 32 top-10 finishes.

A move to North Carolina to compete in the NASCAR Xfinity Series resulted in back-to-back championships (2004, 2005) for Truex, who then moved full time to the NASCAR Cup Series in 2006.

The driver of the No. 78 Furniture Row Racing Toyota is currently fifth in the 2018 point standings, with one victory (Fontana, Calif.), eight top-five finishes and three poles in the first 13 races.