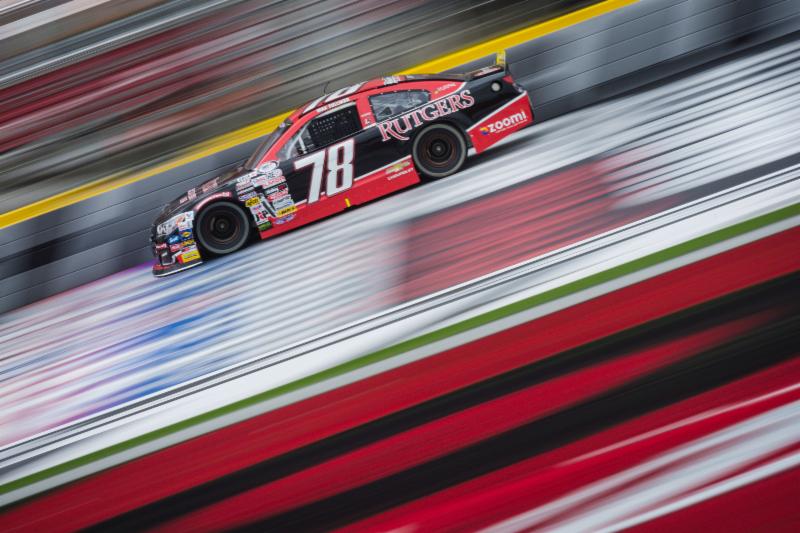 Pocono is the second of a consecutive three-race stretch for the sports car veteran, however, Tullman eyes his third career top-10 finish under the umbrella of Mason Mitchell Motorsports, a former Pocono Raceway winner.
“I’m excited to race at Pocono this weekend,” offered Tullman. “I’ve been studying it all week – heading into the test and the race. Whether it be photos, video, talking with others, I’m taking my Pocono debut very seriously with the intention of bringing home a good finish in my fourth career start.”
Like Charlotte, Tullman and his MMM team will have the support of The State University of New Jersey, the Rutgers School of Business – Camden for Friday’s 80-lap contest.
The Rutgers School of Business – Camden is recognized as a regional leader in business education and a destination school of choice with national recognition for excellence in scholarship, teaching and community partnerships.
“Our debut with Rutgers went very well,” added Tullman. “I think we brought a lot of attention to the school and that was our intention. I think if we can go to Pocono this week and keep our expectations realistic – we’re going to have a solid weekend and continue to bring awareness to Rutgers and the excellent programs they have to offer.”
Luckily for Tullman, ARCA has scheduled an open test at the 2.5-mile triangle on Wed., May 30 which will give the rookie several hours of practice and give him a head start to compete at Pocono’s Tricky Triangle.
“This test is huge for me, especially during race week,” offered Tullman. “I still have a lot to learn in my transition to stock cars, so any track time is important for me. I’m very fortunate to be surrounded by good people. From my crew chief Doug Richert to my team owner Mason (Mitchell) and two-time NASCAR Camping World Truck Series champion Todd Bodine.
“I’m surrounded by very knowledgeable people and at the end of the day – that knowledge helps my capabilities as a driver and my overall performance.”
With an agenda of a top-10 finish in his Pocono debut, Tullman says it’s important to keep his expectations realistic.
“I know Pocono is not going to be an easy track. A top-10 is going to be like a win for us,” Tullman added. “I know I’m going to have the car and the crew. A lot is going to be up to me. I have one of the best spotters on top with Tyler (Green), so I have all the tools. I just need to have a smart race and hopefully, that will be rewarded with a good finish.”
Veteran Motorsports crew chief Richert, who led Dale Earnhardt Sr. to his first Monster Energy NASCAR Cup Series (MENCS) championship in 1980 will continue to call the shots for Tullman.
“Doug and I have a great relationship, which I am very lucky and thankful for,” added Tullman.
“He’s super sharp and really devoted on working to make me a better race car driver. I can’t ask for more than that. He understands the learning curve I’m going through, and his patience is second to none. At the end of the day, Doug’s approach is going to take us from contenders to winners.”
Following Pocono, the 20-year-old Tullman will tackle the immensely fast 2.0-mile oval of Michigan International Speedway before returning to Mason Mitchell Motorsports at the end of June for his Chicagoland Speedway debut.
“It’s been a busy week or so,” added Tullman. “From Charlotte, I went home to attend my brother’s graduation. Now, I’m heading to Pocono before going back to North Carolina to help the team get ready for Michigan. The summer is going to be busy, but I wouldn’t have it any other way.
“Pocono is going to be a lot of fun and I’m excited to have Rutgers onboard again for the ride!”
Tullman will pilot chassis No. 594 in his Pocono debut. Tullman raced this chassis last week at Charlotte in his intermediate track debut. Overall, this car has nine prior ARCA starts, earning one win (Kansas Speedway, 2015), three top-five and five top-10 performances.
In addition to the General Tire #AnywhereIsPossible 200., the IMSA Porsche GT3 Cup Challenge veteran will compete in a minimum of three other ARCA races at Michigan International Speedway, Chicagoland Speedway and Iowa Speedway respectively.
Announced last month, Tullman will also compete in a minimum of two NASCAR Camping World Truck Series races aboard the No. 20 Chevrolet for Young’s Motorsports.
Additional stock car races are set to be added to Tullman’s schedule and will be announced in the immediate future.
Tullman will be a teammate to Blaine Perkins for the first of two races in Long Pond this season.
Monster Energy NASCAR Cup Series spotter Tyler Green will continue to guide in Friday afternoon’s highly anticipated thriller.
The General Tire #AnywhereIsPossible 200 (80 laps | 200 miles) is the seventh of 20 races on the 2018 ARCA Racing Series presented by Menards schedule. Practice begins Fri., June 1 with an hour and 25-minute practice session from 10:00 a.m. – 11:25 a.m. General Tire pole qualifying is set for later in the day at 2:00 p.m. The race is set to take the green flag later in the day shortly after 5:45 p.m. The event will be televised live on FOX Sports 2 (FS2), while ARCARacing.com will stream live timing and scoring throughout the entire weekend festivities. All times are local (Eastern).
Max Tullman Inc. PR