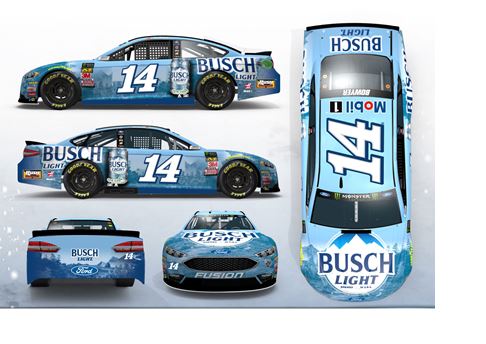 He grew up in Lehighton, Pennsylvania, just 20 minutes from the track.

“I used to go to qualifying all the time there – Pocono means a lot to me,” he said. “It would really mean a lot to me to have a win there at some point in my career. I haven’t been successful with that, yet, but I hope to change that shortly.”

Shortly could come Sunday when Bugarewicz’s driver Clint Bowyer takes to the 2.5-mile layout known as the “Tricky Triangle.” He should be one of the favorites.

Bowyer arrives at Pocono eighth in points after posting three top-five finishes and seven top 10s in the season’s first 13 races. Last week in the Coca-Cola 600 at Charlotte (N.C.) Motor Speedway, Bowyer raced inside the top-five for some of the race before earning a 12th-place finish.

The Bowyer-Bugarewicz combination has already visited victory lane once in 2018 when it won the rain-delayed race March 26 at Martinsville (Va.) Speedway. The victory gave Bowyer his first win at Stewart-Haas Racing (SHR) and gave Bugarewicz his second career victory as a crew chief. His first came at Sonoma (Calif.) Raceway in 2016 in what turned out to be Tony Stewart’s final Cup Series victory as a driver.

It’s been a long journey for Bugarewicz, who spent a lot of time watching his father race at Mahoning Valley (Pa.) Speedway and working on cars at his father’s business long before he even owned a driver’s license. He studied mechanical engineering and performed research for the U.S. Navy through Applied Research Laboratories in graduate school at Penn State University before heading to North Carolina to embark on a NASCAR career that peaked at SHR. He won a championship serving as the lead engineer on SHR’s No. 4 car with Kevin Harvick in 2014. He took over the No. 14 crew chief duties in 2016 for Stewart’s final year of NASCAR competition.

Bugarewicz said he never doubted the No. 14 would return to victory lane with Bowyer.

“I can’t say I wondered when, but I wanted us to break through,” Bugarewicz said. “I wanted it for the team, for the company. This team has been through a lot over three years. Getting Tony his last win was great, was a big step, was great for Tony, was great for the team. But then you always want at least one every year, right? And last year, we didn’t have one and struggled for a little bit and had moments of greatness and moments of struggles. At times it was hard to put a race together. In 2018, we have been more consistent. The team is gelling well. Me and Clint are gelling well. And we’re very fortunate that we’ve already got a win.”

Some of the No. 14 team’s biggest competition will come from SHR teammate Kevin Harvick, who has won five races in 2018 plus the NASCAR All-Star Race two weekends ago. SHR drivers Kurt Busch and Aric Almirola are sixth and 10th in the standings.

Bowyer and Harvick have been friends since 2006, when he arrived at Richard Childress Racing. This weekend at Pocono, they are waging a friendly battle. Bowyer is driving the Busch Light Ford while Harvick is campaigning the Busch Ford.

They plan to compete against each other in social media events this weekend and will appear on stage together at 7:15 p.m. EDT Friday at Pocono’s Block Party in the infield.

“Pocono is a really tough track with three different turns,” he said. “I want to make sure we qualify well so we can get a good starting position and pit stall. Winning in Pennsylvania with Buga would be cool. He’d be thrilled. Heck, so would all of us.”