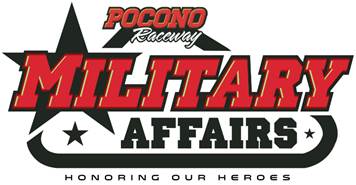 o   The Golden Knights will host a meet-and-greet at the Pocono Raceway Fan Welcome Center in Fan Fair on Saturday at 10 a.m.

o   The Golden Knights will perform a skydiving demonstration during the National Anthem, prior to thePocono 400, on Sunday.

o   The United States Marine Drum and Bugle Corps will perform the “The Star-Spangled Banner” before Sunday’s Pocono 400.

o   200+ new recruits, enlisting in several branches of the military, will receive their Oath of Enlistment prior to the race on Sunday.

o   The ceremony will be led by Lt. Gen. Rudder and is expected to be one of the largest ceremonies ever held at a sporting event.

o   Pocono Raceway will dedicate a plaque to the Gold Star / Families of the Fallen at the Flag Pole located outside Gate 8 and near the main entrance to Fan Fair, on Sunday at 11:10 a.m.

o   The event will be attended by several branches of the military, Pocono Raceway representatives, the Union League of Philadelphia and family members of Gold Star Mothers.

o   Nearly 200 Gold Star Mothers and Families of the Fallen have been invited as guests of Pocono Raceway to the Pocono 400.

o   The Commander of the Tobyhanna Army Depot will present an award to recognize the warrior who has gone above and beyond the call of duty in the local community. This will take place prior to Driver Introductions on the stage near the Start/Finish line on Sunday.

o   Military and Pocono Raceway representatives will gather at the Chair of Honor located in the ADA section of the Grandstand prior to pre-race activities on Sunday. The Honor Guard will place the seat in the upright position as a symbol of recognition to honor POW/MIA.