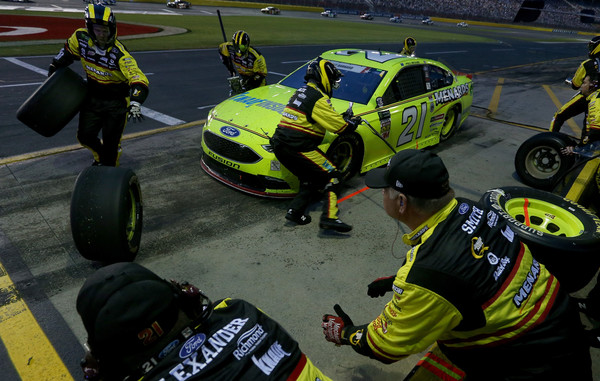 Paul Menard and the No. 21 Menards/Knauf team turned in 600 miles worth of solid performance and came away with a 14th place finish in the Coca-Cola 600 at Charlotte Motor Speedway.

And in doing so, they were able to pay an appropriate tribute to the late Lt. Leevi Barnard, the Patrick County, Virginia, native who made the ultimate sacrifice for his country while serving with the U.S. Army in Iraq on May 21, 2009.

Eddie Wood, who like the late Barnard is from Patrick County, said he was proud of the way his family-owned team represented Barnard, whose name was on the top of the windshield of the No. 21 Fusion.

“I was glad we were able to run well the whole night for Leevi and his family,” Wood said. “His sisters were at the race, and it was the first time they’d been to a NASCAR race.

“And we were honored once again to be a part of a program that represents what Memorial Day is all about. NASCAR and the people at Charlotte Motor Speedway have done a great job with that.”

Wood also said he was impressed with the determination displayed by Menard and crew chief Greg Erwin, who continuously adapted to track conditions that changed as the race went from daylight to dark and also a groove that appeared to shift around more that usual due to being treated with a traction-control compound.

“They kept making adjustments and made the car better and better,” Wood said.

Indeed by the closing 100-lap Stage of the 600, Menard was running in the top 10 before a slide up the track and brush with the wall forced him to spend the final 10 laps trying to nurse his tires to the finish.

Another highlight of the weekend for Wood and Menards/Knauf team was the success of their alliance partner Roger Penske, who was voted into the NASCAR Hall of Fame on Wednesday then scored his 17th Indianapolis 500 victory as a car owner on Sunday.

“We’re really proud of Mr. Penske,” Wood said. “Winning the Indy 500 and making the Hall of Fame in the same week is quite an accomplishment,” Wood said.

Menard’s finish at Charlotte, his sixth of 14th or better in the 13 races this season, moved him up one spot in the points standings to 17th. He’s now 33 points behind Ricky Stenhouse Jr., who is in 16th position, heading into the 400-miler at Pocono Raceway on June 3.