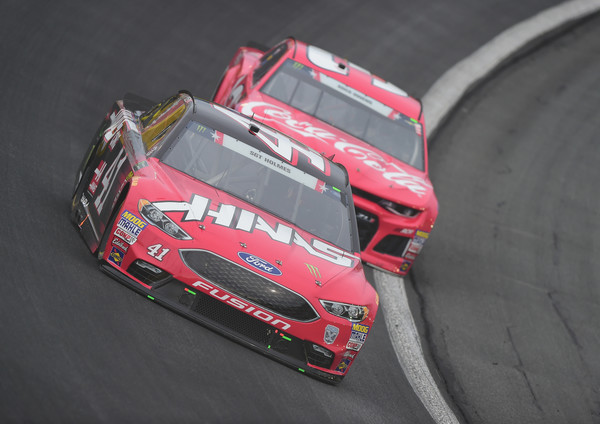 ● The No. 41 Haas Automation Ford Fusion ran just outside of the top-10 for the majority of the stage.

● Busch pitted at the conclusion of Stage 1 for four tires, fuel and air pressure adjustments.

● He pitted under green-flag conditions on lap 159 for four tires and fuel. He was scored just outside of the top-10 when the pit stops cycled through.

● The No. 41 pitted for four tires, fuel and adjustments at the conclusion of Stage 2.

● After a lap-224 caution, Busch took four tires, fuel and chassis and air pressure adjustments. He restarted in ninth place.

● Busch drove the Haas Automation Ford to fourth place before a lap-273 caution.

● During the restart, Busch climbed as high as second place before finishing the stage inside the top-five.

●He pitted for four tires, fuel and adjustments at the end of Stage 3.

● Busch ran as high as third place during the final stage.

● He pitted under green-flag conditions from sixth place on lap 346 and was still scored in sixth when pit stops cycled through.

● Busch held the Haas Automation Ford inside the top-10 to secure his fourth straight top-10 of the season.

● This was Kurt Busch’s seventh top-10 finish of 2018 and his 13th top-10 in 36 career Monster Energy NASCAR Cup Series starts at Charlotte.

●  Kyle Busch won the Coca-Cola 600 to score his 47th career Cup Series victory, his fourth of the season and his first at Charlotte. His margin of victory over second-place Martin Truex Jr., was 3.823 seconds. With his Coca-Cola 600 victory, Kyle Busch became the first driver to secure a points-paying win at every track the Monster Energy NASCAR Cup Series visits.

“We just didn’t do anything spectacular tonight. We had one really good restart, but we were positioned for restarting fourth. We struggled on pit stops the first half of the race, but the second half they cleaned them up and we kept up with the track as best we could. We just didn’t have any short-run speed that was stellar. We didn’t have any long-run speed that was stellar. We kind of just did everything as a top-10 team would do and I’m glad we put the Haas Automation Ford in eighth. We’ll have to keep fighting.”

The next event on the Monster Energy NASCAR Cup Series schedule is the Pocono 400 on Sunday, June 3 at Pocono (Pa.) Raceway. The race begins at 2 p.m. EDT with live coverage provided by FS1 beginning at 12:30 p.m.