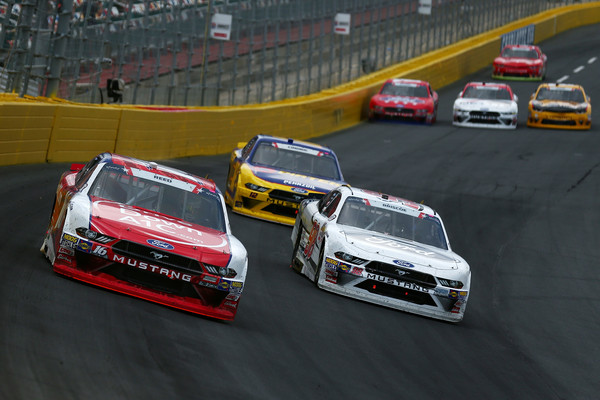 Despite starting at the tail end of the field, Ryan Reed raced his way from the back all the way to the top 10 Saturday afternoon at Charlotte Motor Speedway.  Reed had a fast No. 16 Drive Down A1C Lilly Diabetes Ford but got loose and brushed the outside wall midway through the race resulting into a trip to the garage to repair a hole in the oil pan.  Reed returned to the track to gain a few positions as the race concluded, ultimately crossing the finish line 29th.

“The car was fast,” said Reed.  “I just got loose in turn 1 and couldn’t gather it up,  I hate it for my guys but today was progress, it’ll just have to wait another week to prove it on the stat sheet.”

Reed started the race from the back of the field after not getting through technical inspection in time to log a lap in qualifying Saturday morning.  With nowhere to go but forward, Reed began his march through the field from the 40th position.  By lap 15, he had worked his way into the top 20.

At the conclusion of Stage 1, Reed had worked his way up to 13th.  After a pit stop for four tires, fuel, and an air pressure adjustment, he lined up 13th for the second Stage.  Over the 45-lap Stage, the No. 16 developed a tight handling condition, but Reed was able to maintain his track position.

Reed took the green for the final Stage 15th and cracked the top 10 shortly after before brushing the wall.  Reed got loose and the car stepped out unexpectedly.  A trip down pit road fix the right-side fenders unveiled an oil leak.  Reed took his Ford to the garage where a hole in the oil pan was repaired in just 12 laps.

Reed returned to the track before the red flag was displayed to the field for rain.  After a brief delay, NASCAR was able to get the track dried and the race resumed with 24 laps remaining.  Reed was able to gain a few positions from his garage repairs to cross the finish line 29th.