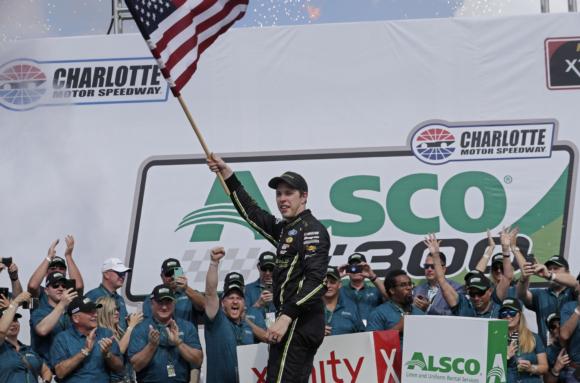 No matter the weather, Brad Keselowski was the man to beat when the laps counted down in Saturday’s Alsco 300 at Charlotte Motor Speedway. Keselowski held off Cole Custer and Christopher Bell on a green-white-checkered restart, powering ahead to win an exciting race that was rain-delayed 28 laps short of the finish. Once the race restarted, Keselowski proved his No. 22 Team PenskeFord had no equal as the veteran driver – who will go for his first Coca-Cola 600 win on Sunday – sped to his 38th career NASCAR Xfinity Series triumph.

Busch led a race-high 93 laps and won Stages 1 and 2, but an aggressive move after a restart on Lap 161 saw Busch’s Toyota slide into the grass and back up into traffic, where it collided with Chase Briscoe’s Ford. Both drivers finished the race, but the accident removed Busch from contention.

BRAD KESELOWSKI, No. 22 Fitzgerald Gliders Ford Mustang (Race Winner): “Just a lot to talk about from today. It’s hard to pick a place to start. To be quite honest, it was an eventful day. The rain and what happened there with the strategies (was tough), but so far this week has been a great week. Nothing better than to start off Memorial Day weekend than to get a win. So, I’m proud of everyone on the team here. We were prepared. It was hard to execute today but we were able to persevere. It was hot today. It was smoking in the car. That’s just part of the challenge of racing on days like this. I knew I needed to execute the restarts. I just needed to be flawless. That was really important there at the end.”

BRIAN WILSON, No. 22 Fitzgerald Gliders Ford Mustang (Winning Crew Chief): “The strategy was kind of all over the place. It was an up-and-down day for us. To be honest with you, when we pitted there I didn’t know if it was the right call. We talked about doing the opposite of the leaders. And I knew that was the right call at that point. But I was really hoping a lot of those guys were going to pit too. And we would have a set of tires to put on later on. We seemed to have a really good short run car. But the way the circumstances played out, the red flag and all of the cautions, the rain definitely helped us.”

COLE CUSTER, No. 00 Haas Automation Ford Mustang (Finished 2nd): “In our backyard, this is real important. We have had good speed all year with our car. We just haven’t had the finishes. We’re working really hard. We wish we won there but it was a run we needed. This will be good for the long stretch we have coming up. I’m looking forward to the next few races. … It was so important to try and get a run. We were just trying to get some clean air, which was pretty tough. The 22 (Keselowski) obviously had the most air and he won. Our car was pretty good all day. We were just trying to get track position. When we had clean air, it was huge. It was a big difference when compared to the middle of the pack.”

CHRISTOPHER BELL, No. 20 Rheem Toyota Camry (Finished 3rd): “I had better tires than (Keselowski) at the finish. I just didn’t execute. I’m going to be curious to look at the restart there and see what happened. I just tried to continue to accelerate there. I was just heartbroken when I saw that piece of debris fly off of those cars (with two laps to go). I felt like we were starting to make some runs when I think we were coming to two to go. And I was getting the top to go pretty good there in Turns 1 and 2. I felt like I was going to have a shot at him. Obviously when the yellow came out I did have a shot at him. I just didn’t execute. For me, we just fought dirty air the entire race. Qualifying seventh and starting on the bottom. I just couldn’t ever really run through there. I felt like we were capable of running in the top two or three all day. We just never really had the opportunity to show how good our car was until right there at the end.”