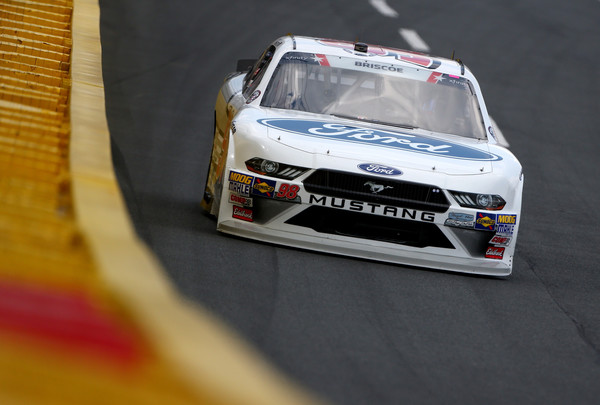 ● Climbed to seventh in the opening laps before reporting his car was tight off the corners.

● Dropped to 18th place before he could come to pit lane for adjustments at the end of the stage.

● Pitted for four tires and fuel plus adjustments before the stage’s start.

● Started turning top-six lap times and drove from 18th to as high as fifth.

● Restarted 10th with 50 to go and immediately climbed to fifth before giving up several positions to cars with newer tires.

● On the restart with 39 laps to go, Kyle Busch spun on the front stretch and collected Briscoe forcing him to pit lane for repairs.

● Briscoe restarted 23rd, the last car on the lead lap, with 34 laps remaining.

● Briscoe climbed to 11th and survived the wild racing in the closing laps and overtime.

● Thirteen cautions slowed the race for 59 laps with only 22 of the 40 drivers finishing on the lead lap.

● Brad Keselowski led 77 laps to win the Alsco 300 earning his 38th career Xfinity Series victory. It is his second victory of the season and fourth at Charlotte. His margin of victory over second-place Cole Custer .421 seconds.

Chase Briscoe, driver of the No. 98 Ford Mustang for Stewart-Haas Racing With Biagi-DenBeste:

“I wish we could get a clean race. Today I think we had a lot better car than we showed. We were looking really good on tires and in a good position then got caught up in Kyle’s (Busch) problem. I think we could have finished in the top five. Our Ford was fast today and the guys at SHR worked really hard the whole weekend. I can’t wait to get in this Mustang again.”

The next event on the NASCAR Xfinity Series schedule is the Pocono Green 250 Recycled by J.P. Mascaro & Sons on Saturday, June 2 at Pocono (Pa.) Raceway. The No. 98’s next race is the LTi Printing 250 on Saturday June 9 at Michigan International Speedway with Kevin Harvick behind the wheel. Briscoe’s next race in the No. 98 will be at Kansas Speedway in Kansas City on Oct. 20.