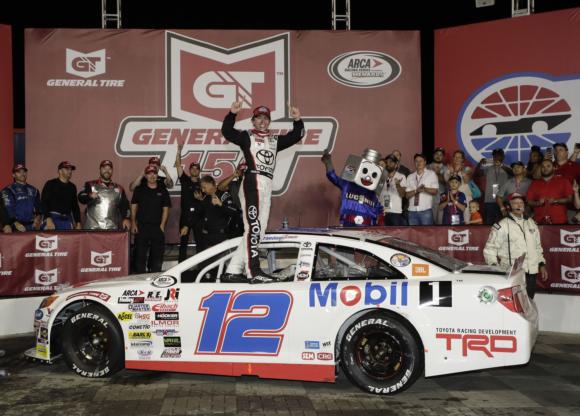 There was no keeping up with the Joneses as Thursday’s General Tire 150 at Charlotte Motor Speedway wound to a close. Brandon Jones saved his best for last, overpowering leaders Todd Gilliland and Sheldon Creed in the late stages of the ARCA Racing Series presented by Menards’ first race at Charlotte since 2004. Jones wrapped up Spectrum Pole Night in style, winning a dramatic race that saw Gilliland – the polesitter – dominate the first half before three-wide battles for the lead became the norm in the last 30 laps.

Jones, who competes for Joe Gibbs Racing in the NASCAR Xfinity Series and will race in Saturday’s Alsco 300 at Charlotte, captured his fifth career ARCA victory after Riley Herbst made a stirring charge to second at the finish.

Herbst, Joe Gibbs Racing’s ARCA development driver, ran down Jones in the final laps and got to the bumper of Jones’ Toyota on the final lap, but Jones avoided lapped traffic and hung on for his first win at General Tire’s home track.

BRANDON JONES, No. 12 Mobil1/TRD Toyota (Race Winner): “It’s incredible. I’ve been to Charlotte so many times in trucks and Xfinity cars. I’ve been close a couple of times but never been in this winner’s circle. This is really, really cool. We came down here to try and win this race and that’s what we did. It was interesting to say the least there. I knew we were really quick all day in practice and really fast there early on in the race. We were just so free all day long. It was almost too hard to adjust on it because it was so good on long runs there. We had run some people down. We had a shot to make an adjustment on the last stop and I knew it was going to be hard not to do it. But at the end of the day, if we didn’t make a swing at it, we wouldn’t have had enough to get by. Everything worked out really well. The caution did save us there at the end. We had a chance to let the tires cool off a bit. Somehow I was able to keep (Herbst) off my bumper back there and keep the air on his front fender and make sure I ran that bottom line. It was going to be hard for him to get around us without giving us a tap. All in all, it was a good day.”

RILEY HERBST, No. 18 NOS/ORCA Coolers/Advance Auto Parts Toyota (Finished 2nd): “It was awesome. I wish it was 101 laps or 102 (instead of 100). We had a great car all night. I can’t thank everyone at Joe Gibbs Racing enough for giving me this car. I messed up in qualifying, which set us back in 18th. Over time we worked our way back up. I just wish we would’ve had another lap at the end there. It was awesome with two-wide and three-wide racing from all the way to the bottom to all the way to the top. Charlotte Motor Speedway is one of my new favorite race tracks. It’s was awesome but it was rough. You’ve got to drive hard 100 percent of the time.”

SHELDON CREED, No. 28 United Rentals Toyota (Finished 3rd): “I probably didn’t help our guys there when we unloaded off the trailer. We were extremely loose this morning in practice. We had to go to work on the car. We were behind the eight ball starting near the end. We were going to be terrible or really good. We went into qualifying pretty blind. We started the race really loose. The guys made really good pit stops and the car came to me there. We had a really good call to get some pressure in the tires. I didn’t have fire-off speed like the others did. Five or six laps in my car would get really good. It was cool to get the lead. It was fun racing with those guys. These cars have so much downforce these days so when you have a car right there on your fender, I get extremely loose. During that restart I just tried to get all I could get.”

TICKETS:
Tickets, pre-race pit passes and camping packages for Sunday’s Coca-Cola 600 available by visiting online. Kids 13 and under get in for just $10. Race tickets are also available at the gates or by calling 1-800-455-FANS (3267).

ASCS Southwest Region Set For 18 Rounds Of Action In 2020