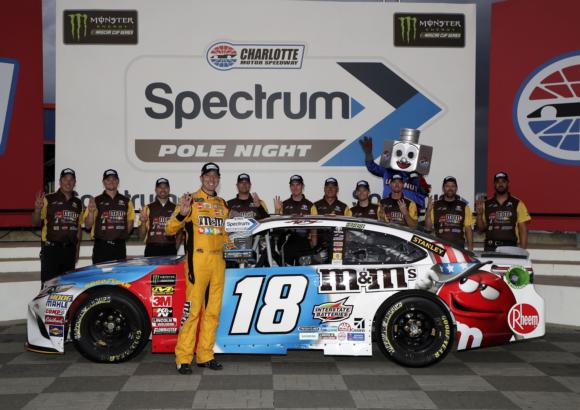 Kyle Busch collected his 30th career Monster Energy NASCAR Cup Series pole during Thursday’s Spectrum Pole Night at Charlotte Motor Speedway, using a blistering 191.836-mile-per-hour lap in Round 3 of qualifying to earn the right to lead the field to green in Sunday’s Coca-Cola 600. Joey Logano will start second after a 191.218-mph run.

KYLE BUSCH, No. 18 M&M’s Red, White and Blue Toyota Camry (Pole Winner): “Hopefully, this sets us up well. We’ve really been good here in the past and we’ve come close. We just need to be able to close the deal, I guess. We look forward to being able to chase it this weekend. We’ve been pretty fast this year and also here at Charlotte in the past. This weekend here, the Coke 600 is a big weekend for us, one that has meant a lot to me since I was a kid growing up watching it on television. The All-Star Race and the 600, I dreamed of one day being able to win them both. We saw in practice with our speeds; we ran three runs and all three were the same speed. … Even changing tires, we run the same speed. We were kind of worried going into the qualifying session. The guys did their thing and we got faster. We tried a little technique on my part and it just kind of came together.”

JOEY LOGANO, No. 22 Shell Pennzoil Ford Fusion (Outside Pole Winner): “I came in here earlier and talked about how important qualifying is. And in practice we were around 20th and I was thinking, ‘Qualifying is important and we’re not very fast.’ But, we made some good adjustments. The track also changed and it was hard for me to say what was the changes and what was the track. The cars ran in the PJ1 a lot and activated it. There was speed there. Overall, the car got faster and that’s all I care about. We got a good starting spot, not the pole, but we improved every round. I think it’s the best we’ve qualified all year. So that’s a good sign for us. Hopefully when we come back here on Saturday we can make some good adjustments and get it where can be good on the bottom and the top as the track changes like you just saw.”

TICKETS:
Tickets, pre-race pit passes and camping packages for the Coca-Cola 600 available by visiting online. Kids 13 and under get in for just $10. Race tickets are also available at the gates or by calling 1-800-455-FANS (3267).