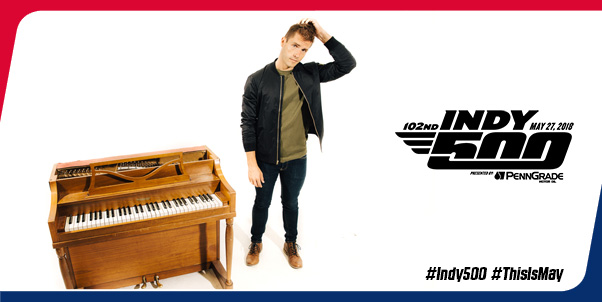 Indiana-born singer-songwriter Jon McLaughlin will sing “God Bless America” during pre-race ceremonies for the 102nd Indianapolis 500 presented by PennGrade Motor Oil on Sunday, May 27, a patriotic tradition of “The Greatest Spectacle in Racing.”

The multi-talented McLaughlin, a native of Anderson, Indiana, has thrilled fans with his soulful pop vocals and piano playing since his self-titled debut record in 2004.

“It’s such an honor for me to sing at the Indy 500 again,” McLaughlin said. “There is absolutely nothing else like it!”

He stepped into the international spotlight by performing his song “So Close” in the Oscar-nominated Disney film “Enchanted” in 2007. The song also was nominated for an Oscar, and McLaughlin performed at the 80th Academy Awards in February 2008.

McLaughlin’s songs also have been featured in the hit TV series “Scrubs” and “A Little Thing Called Life.”

Classically trained pianist McLaughlin also has toured with Kelly Clarkson, who will sing the national anthem before the Indianapolis 500 this year, Sara Bareilles, O.A.R., Sister Hazel and Straight No Chaser, and he opened for the legendary Billy Joel at two shows in 2014.

McLaughlin’s talents as a writer and producer have attracted attention from music superstars. McLaughlin and Demi Lovato co-wrote “Every Time You Lie” and “Falling Over Me” for Lovato’s second album, “Here We Go Again.”

This will be the second time McLaughlin has performed “God Bless America” before the Indianapolis 500, as he also performed in 2013. McLaughlin also was the headline artist for the inaugural Rev gala party in 2014 at IMS to kick off the Month of May.

“It’s always a pleasure to welcome Jon McLaughlin back to the Indianapolis Motor Speedway,” IMS President J. Douglas Boles said. “His performances always strike a chord with our fans and are an important part of our salute to our great nation and its Armed Forces during pre-race ceremonies for the Indianapolis 500.”

Visit IMS.com to purchase tickets for the 102nd Indianapolis 500 Presented by PennGrade Motor Oil on Sunday, May 27, and for more information on the complete Month or May schedule at IMS.