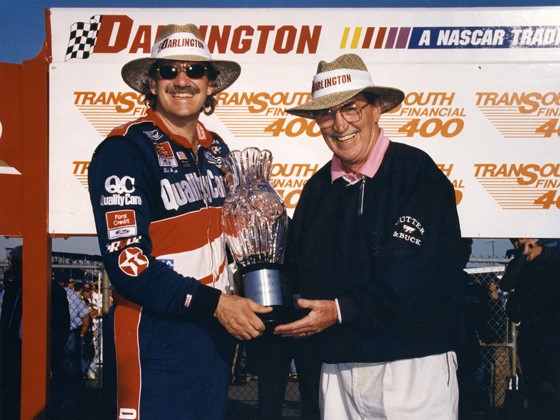 Jim Hunter, Darlington Raceway President from 1993-2001, was honored by his peers on Wednesday, May 23, by being named the Landmark Award for Outstanding Contributions to NASCAR recipient.

Hunter will be honored during the NASCAR Hall of Fame induction ceremonies in January of 2019.

Hunter, a lifelong resident of Darlington, S.C., also served as NASCAR Vice President of Communications for several years following his time at Darlington. His wife, Ann, still resides in Darlington.

“Jim Hunter was a legendary figure at Darlington and in NASCAR and is very deserving of the Landmark Award,” Darlington Raceway President Kerry Tharp said. “He oversaw great expansion projects at Darlington Raceway and helped continue to build the track’s legacy throughout a time of tremendous growth in NASCAR. He left an indelible and everlasting impact on the sport and for that we will be forever grateful.”

Hunter was a graduate of the University of South Carolina, where he played football for the Gamecocks. He was part of the NASCAR community for the better part of six decades, having covered the sport in newspapers, before joining the executive ranks of the sanctioning body. He also authored several books on NASCAR and Darlington Raceway in his career.

The media center at Darlington Raceway still carries his name as the Jim H. Hunter Media Center, which hosts media from around the country every Labor Day weekend for the track’s annual Bojangles’ Southern 500 weekend.