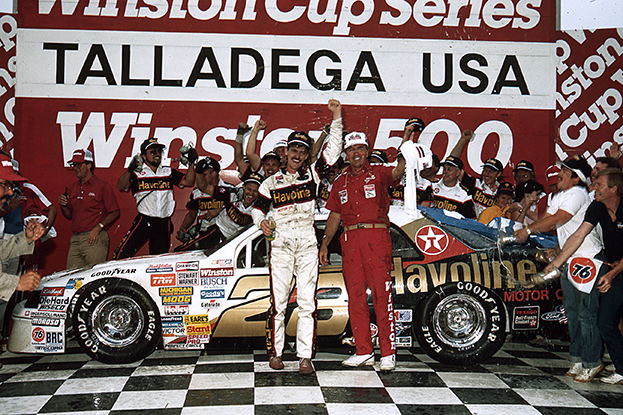 Davey Allison, who captured his first career NASCAR Cup Series triumph at his home track of Talladega Superspeedway, along with six-time Talladega victor Jeff Gordon, were named today as part of the 2019 NASCAR Hall of Fame class.

In addition, long-time NASCAR executive and former Talladega Superspeedway PR Director, Jim Hunter, was named as the recipient of the 2019 Landmark Award for Outstanding Contributions to NASCAR. He, too, will be recognized in January.

“What an incredible 2019 NASCAR Hall of Fame class,” said Grant Lynch, Chairman of Talladega Superspeedway. “All are so deserving, and we offer our congratulations.

“With Davey and Jim, both are very special to the state of Alabama, and Talladega Superspeedway in particular. People just gravitated to them during their careers. Both were larger-than-life figures in our sport, and we are so proud of them.”

Davey Allison
Allison, the Hueytown, AL native, had 19 total MENCS victories (in just 191 events), three of which came at Talladega as well as the 1992 DAYTONA 500. In his 14th career start in NASCAR’s premier series, he captured his first victory – at Talladega in May of 1987 – and later that year claimed the NASCAR Rookie of the Year honors. The son of Hall of Famer Bobby Allison finished third in the 1992 championship in one of the most dramatic and highly contested finales in NASCAR history. His life was tragically cut short after a helicopter accident at Talladega in 1993.

Davey ranks second only to Dale Earnhardt Sr. in total Talladega wins with eight. In addition to his three MENCS wins, he has four ARCA Racing Series triumphs and one International Race of Champions (IROC) win. He made his MENCS debut at Talladega in 1985 when he finished 10th. Allison cut his teeth working at his dad’s shop after school and at night. His behind-the-wheel career began in 1979 at Birmingham International Raceway. Allison finished fifth in his very first feature, and won his first race that year in only his sixth start. One of NASCAR’s 50 greatest drivers, Allison, a member of the Alabama Gang (original members Bobby & Donnie Allison, Red Farmer) is also a member of the International Motorsports Hall of Fame and Talladega/Texaco Walk of Fame.

Jeff Gordon
Gordon, with once-in-a-generation talent and charisma, helped take NASCAR from a regional sport to the mainstream in the 1990s. As a 24-year-old driving for Hendrick Motorsports, he became the youngest champion in the modern era to win a premier series title in 1995. He went on to add three more titles – 1997, ’98 and 2000. Overall, he won 93 races, which ranks third on the all-time list only behind Richard Petty and David Pearson.

Gordon’s six Talladega Superspeedway wins rank second (tied with Dale Earnhardt Jr) to Dale Earnhardt, who reigns with 10 triumphs. In 46 starts (first in 1993 at age 21) at the biggest and baddest track on the planet, he had an incredible 16 top-five finishes. Gordon’s five pole positions at Talladega rank in a tie for third on the TSS all-time list, and in his final two starts at TSS in 2015, he swept both pole positions. His victory in the 2007 GEICO 500 was his 77th career win, pushing him past Earnhardt, for sixth place on the all-time NASCAR list.

Roger Penske
Penske, known as ‘The Captain,’ has steered one of the most success motorsports ships in NASCAR history, winning more than 100 races as a car owner in NASCAR’s premier series, as well as a title with Brad Keselowski in 2012.

His record at Talladega is stellar, ranking third on the all-time winning car owner list with seven triumphs. Since the spring of 2012, his drivers Keselowski and Joey Logano have won seven times, including six of the last eight. Logano won April’s GEICO 500 while Keselowski is the defending champion of the 1000Bulbs.com 500 which will take place on Sunday, Oct. 14. Penske owned the Porsche 917-30 that driver Mark Donahue wheeled to a world record speed on a closed-course – 221.160 mph – at Talladega Superspeedway in August of 1975. The record stood internationally for four years and 11 in the United States.

Alan Kulwicki
Noted Wisconsin short-track ace Kulwicki moved to Charlotte in 1984 and was determined to make a name for himself with his self-owned racing team. With no sponsor and a limited budget, he won the 1986 NASCAR Rookie of the Year. Throughout his career, Kulwicki received lucrative offers from powerhouse race teams but insisted on racing for himself. His determination led to his first of vice career wins at Phoenix at 1988. Four years later, he overcame a 278-point deficit with six races remaining to capture the 1992 NASCAR Championship.

In 13 races at Talladega Superspeedway, Kulwicki’s best result was a fourth-place effort in 1990, followed by a sixth in May of 1992. Named one of NASCAR’s 50 Greatest Drivers, Kulwicki died in a plane crash in March of 1993.

Jim Hunter
Hunter, who was an Alabama resident for six years after being named the PR Director for Talladega Superspeedway in 1975, left an incredible mark on NASCAR and those associated with the sport. His wit and wisdom helped guide NASCAR’s growth during portions of six decades as a company executive, track president, public relations professional and journalist. Hunter broke into the motorsports business as a member of the media in the 1950s. He worked as the sports editor of the Columbia Record, was an award-winning reporter for the Atlanta Journal-Constitution and columnist for Stock Car Racing magazine.