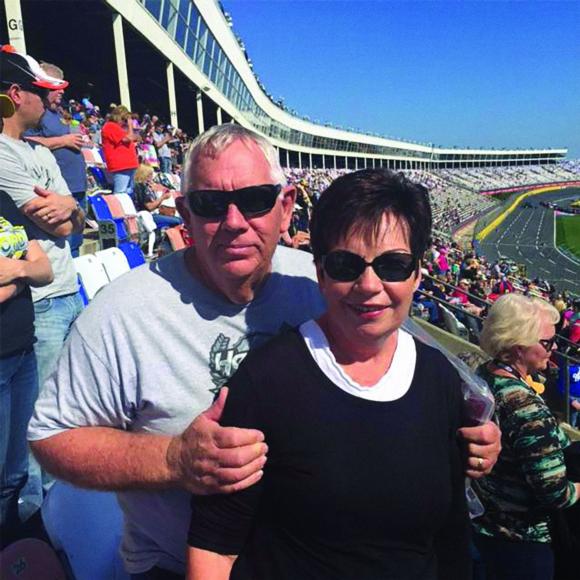 This weekend, Peggy and Leon Harrison will commemorate an accomplishment worthy of a visit to Victory Lane – 50 years of marriage.

The Harrisons exchanged vows on May 18, 1968, in New Jersey and then traveled south to Charlotte Motor Speedway for the ninth annual Coca-Cola 600. It was the perfect location for the longtime race fans to honeymoon after they met at New Jersey’s Flemington Speedway in 1964.

Leon Harrison, an Alpha, New Jersey, native, drove late models and modifieds at dirt tracks in the Northeast from the 1960s until 1980.

“It’s always been a passion of mine,” Leon Harrison said. “When I was a kid growing up in New Jersey, I’d go to Flemington to watch races, and it hooked me forever.”

Peggy Harrison, of Phillipsburg, New Jersey, grew up a race fan and the 1968 edition of the 600-mile race marked her introduction to a new type of racing.

“That was the first NASCAR race I saw,” she recalled. “It was very different compared to now. It wasn’t built up like it is now. We had concrete seats back then.”

Charlotte Motor Speedway’s surroundings have since transformed, but the track has retained its iconic status and remains the perfect place for the Harrisons to return to celebrate their golden anniversary.

The Harrisons have witnessed nearly two dozen races at the historic 1.5-mile track since first visiting during their honeymoon. Many of those weekends were spent camping alongside their fellow fans.

“When you have a travel-trailer like we had for years, it’s just such a special experience to spend with a group of friends,” Peggy Harrison said. “For years, we had a group of six or eight trailers where everyone parked together and stayed together.”

The thrill of attending a race is a feeling second-to-none, and the Coca-Cola 600 amplifies that experience with its special pre-race pageantry ahead of one of the sport’s crown jewel events.

“You have to know NASCAR and be at the races to know what it feels like,” Peggy Harrison noted. “The flyover and all of the pageantry around the 600, it’s breathtaking. Just the camaraderie of it all is fun. … Charlotte’s our favorite track. It’s a beautiful track in a beautiful setting.”

TICKETS:
Tickets, camping and upgrades for every 10 Days of NASCAR Thunder event are available at the gates, by visiting charlottemotorspeedway.com/tickets or calling 1-800-455-FANS (3267).