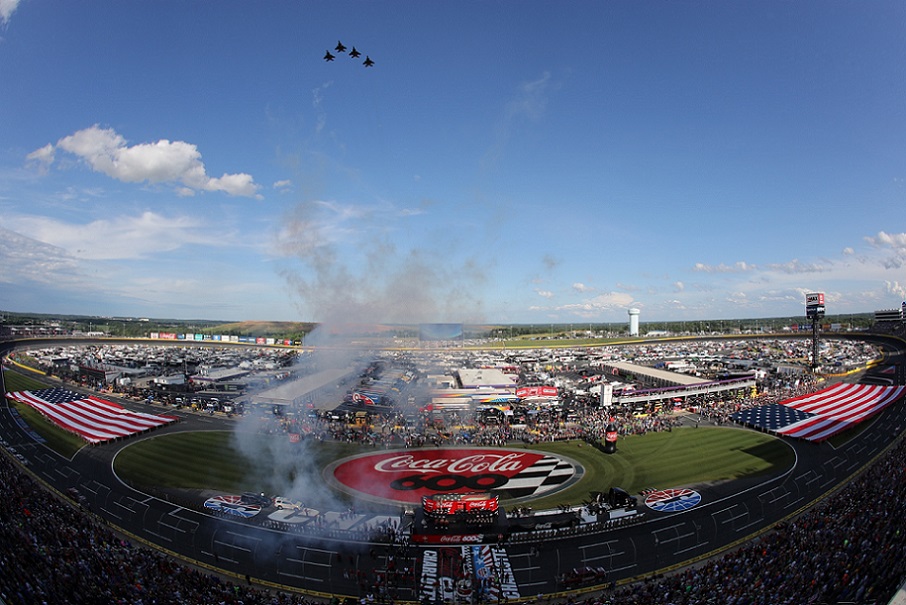 In a patriotic pre-race Salute to the Troops like no other on Memorial Day weekend, Charlotte Motor Speedway will incorporate troops from all five branches of the U.S. Armed Forces amid a remarkable display of star power and firepower prior to Sunday’s 59th running of the Coca-Cola 600.

The speedway will highlight the Department of Defense’s “This is Your Military” initiative by paying tribute to each of the military branches, featuring special guests and showcasing vehicles and awe-inspiring displays of military prowess. Six hundred troops each from the U.S. Army, the U.S. Marine Corps, the U.S. Navy, the U.S. Air Forceand the U.S. Coast Guard will march in the pre-race festivities.

Senior leaders at each branch of the military will also address the crowd, including:

On Sunday at 4:20 p.m., fans will be treated to aerial thrills and ground-pounding firepower as F-15 fighter jets and Blackhawk helicopters with a rappel team join a collection of infield attractions including three Humvees, six Howitzers, one HIMARS rocket system, a Marine MTVR vehicle and two Combat Rubber Raiding Craft.

The Fort Bragg Firing Party will take part in a 21-Gun Salute before the stars of the Monster Energy NASCAR Cup Series light up the night in NASCAR’s toughest test of man and machine. Additionally, the Navy, Marine Corps and Air Force will have interactive, fan-friendly displays in the speedway’s Fan Zone.

“Charlotte Motor Speedway has a proud history of saluting our great nation’s armed forces, but this year’s pre-race show will be the biggest, most incredible one we’ve ever had,” said Greg Walter, the executive vice president of Charlotte Motor Speedway. “We’re thankful that so many of our local service members join us each year at America’s Home for Racing to witness the awesome display of patriotism and racing excitement. Like the giant American flag we’ll have at the race, I can’t wait to see it unfold.”

In conjunction with the U.S. Department of Defense, Charlotte Motor Speedway executed “Mission 600,” a series of visits by NASCAR drivers to regional military bases. Brad Keselowski visited Naval Station Norfolk on April 19. Austin Dillon and the No. 3 Coca-Cola Chevrolet Camaro ZL1 pit crew visited Fort Bragg on April 26 and Kurt Busch checked out Marine Corps Base Camp LeJeune on May 8. Darrell “Bubba” Wallace headed to Seymour Johnson Air Force Base on May 9 and Alex Bowman and the No. 88 Nationwide Chevrolet Camaro ZL1 pit crew visited U.S. Coast Guard Station Wrightsville Beach on May 17.

Through the speedway’s “Patriot Partners” program, race fans or corporate customers can buy a ticket for a member of the U.S. Armed Forces for just $25.

TICKETS:
Coca-Cola 600 tickets for adults start at just $58 while kids 13 and under get in for $10. Tickets, camping and upgrades for every 10 Days of NASCAR Thunder event are available at the gates, by visiting charlottemotorspeedway.com/tickets or calling 1-800-455-FANS (3267).