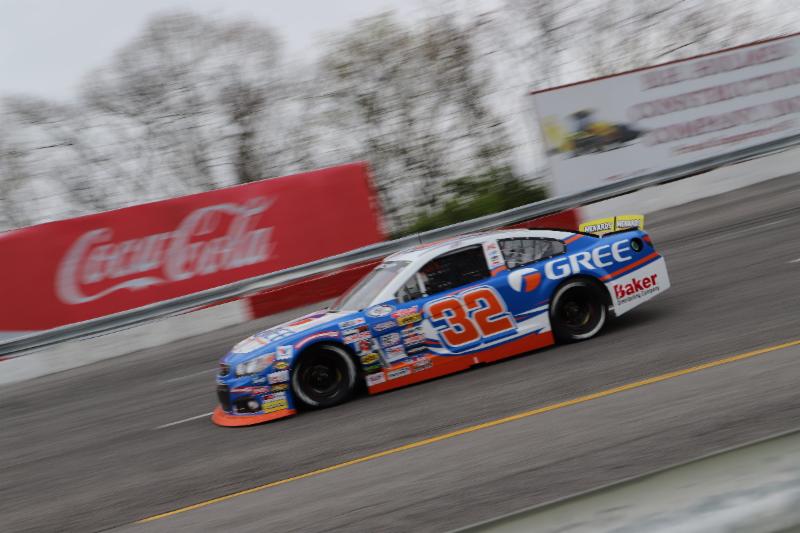 Even after qualifying was rained out Saturday afternoon at Toledo Speedway, Gus Dean (@gusdean) and his Jamie Jones led Win-Tron Racing team knew their No. 32 GREE Cooling Products | Baker Distributing Chevrolet was capable of contending for the win in Sunday’s Menards 200 at Toledo Speedway.
Unfortunately, a mid-race accident cut the team’s bid short in the fifth ARCA Racing Series race of the season.
Starting the 200-lap race eighth based on their practice speed from Saturday morning, Dean hovered just outside the top-five throughout much of the race’s first quarter.
A pit stop for two tires, fuel and a track bar adjustment jumped the Bluffton, S.C.-native to sixth on the grid and eyeing a presence inside the top-five approaching halfway.
Following in the tracks of MDM Motorsports teammates Sheldon Creed and Harrison Burton, the two cars made contact with Dean taking action to avoid the tangling race cars. Dean’s Chevrolet, however, made contact with the outside backstretch wall trying to refrain from connecting with Creed and Burton.
Dean’s No. 32 GREE Cooling Products | Baker Distributing Chevrolet suffered the worst damage in the incident sending his GREE Racing team to the garage for the remainder of the race.
The team was credited with a 20th place finish in Dean’s third start at the Northern Ohio race track.
Before the incident, Dean’s Chevrolet was clocked as one of the fastest cars on the track for multiple laps. The continued speed continues to give the Mooresville, N.C.-based team the confidence that their finish was not an indicator of their performance in the third short track race of 2018.

Kofoid, Toyota Victorious At I-44 Riverside Speedway in POWRi