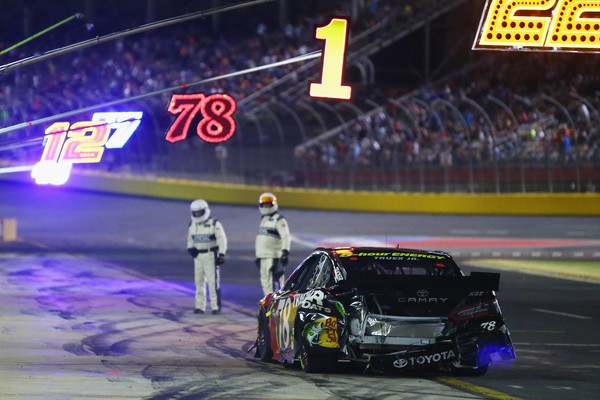 When it comes to restrictor-plate racing Martin Truex Jr. can’t seem to shake the bad luck of being involved in a multicar accident.
NASCAR instituted a new rules package which included horsepower-choking restrictor plates for Saturday night’s non-points All-Star Race at Charlotte Motor Speedway.
It appeared for three of the first four stages that Truex was going to avoid being in an accident as he ran up front and in strong contention to win the race and the $1 million first-place prize.
Driving the No. 78 5-hour ENERGY/Bass Pro Shops Toyota, Truex finished second in the first stage (30 laps), fourth in the second (20 laps) and he was leading the 20-lap third stage when a caution came out with two laps to go. In fact, Truex led 16 of the 18 laps in the third stage before the yellow flag waved.
To prepare for the final 10-lap shootout the No. 78 team, along with a number of other teams, came down pit road for fresh tires instead of maintaining their track position as the third stage headed into overtime.
Truex restarted 11th for the green/white/checkered overtime finish. But before one lap was completed he was involved in an eight-car accident coming off of Turn 3. The heavy damage to the No. 78 forced Truex to take an early exit from the race and a 17th-place finish.
“Yeah, just not a whole lot of room going into (turn) three,” explained Truex. “We were four-wide on the restart and just trying to get into (turn) three without crashing.
I knew we had to get through that green/white/checkered to have a shot to win, but I also knew if I lifted there I would have been the only one that lifted and the others would have gone on and passed me and we wouldn’t have won this thing.
“This was the first time running this (rules) package and we had to gamble a little bit. We had to roll the dice since we were off when we came here. Had a lot to learn today and we used it well. We put on a hell of a show at least while it lasted. The guys did a really good job with our 5-hour Energy/Bass Pro Shops Camry. Pit stops were really good again. I hate what happened for everybody. All our guys here and everybody back at the shop in Denver, thanks for a great race car.”
The race winner was Kevin Harvick.  Rounding out the top-10 in order were: Daniel Suarez, Joey Logano, Denny Hamlin, Chase Elliott, Jimmie Johnson, Kyle Larson, AJ Allmendinger, Kyle Busch and Kasey Kahne.
The NASCAR Cup Series remains at the 1.5-mile Charlotte Motor Speedway for the running of the Memorial Day Weekend Classic – the Coca-Cola 600, Sunday May 27.
FRR PR/Photo Sarah Crabill/Getty Images
Post Views: 165