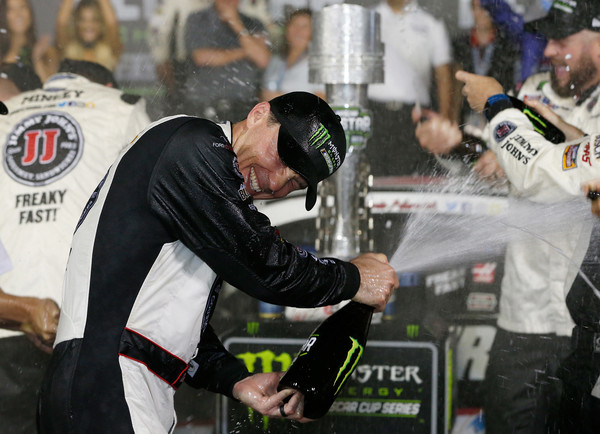 There were loads of lead changes, plenty of pack racing and a plethora of passing, but no one could stop Kevin Harvick when the chips were down in Saturday night’s Monster Energy NASCAR All-Star Race at Charlotte Motor Speedway. Harvick held off Daniel Suarez – who advanced out of the Monster Energy Open – and Joey Logano on a restart with two laps to go to claim his first all-star win since 2007. A new aerodynamics package which pushed cars closer together made for a scintillating spectacle of three- and four-wide racing action around America’s Home for Racing.

Harvick, the driver of the No. 4 Jimmy John’s Ford Fusion, led a race-high 36 laps and assumed the lead for good on the last lap of Stage 3. His drive to victory was far from assured, though, after a melee eliminated favorites including Martin Truex Jr., Kyle Busch and Brad Keselowski from contention. Suarez’s Toyota, on the final restart of Stage 4, moved beside Harvick thanks to a push from Joe Gibbs Racing teammate Denny Hamlin. Harvick held station coming to the white flag and powered his Stewart-Haas Racing machine to the team’s first All-Star Race win since 2009. Suarez finished second with Logano third, Hamlin fourth and Chase Elliott fifth.

Jimmie Johnson was sixth with Kyle Larson – who spun out in the final laps – rebounding to seventh. A.J. Allmendinger, Kyle Busch and Kasey Kahne completed the top 10.

KEVIN HARVICK, No. 4 Jimmy John’s Ford Fusion (Race Winner): “We had a really fast car. I’ve just got to say ‘Thank you’ to the aero department and the fab shop, all the guys on the engineering side of things. And, a special thanks to the Roush Yates engine department. They put a lot of effort into restrictor plate racing. And we won. This is just unbelievable. Our car was super-fast. I could accelerate really well. If I could just get to Turn 2 even (on the final restart), I felt like we were going to accelerate past (Suarez) on the backstretch. I was not very good on the bottom. I’d push wide. But in a straight line, this thing was a rocket. … Everything’s going our way. We have really fast race cars. Everybody is executing. Our pit crew rebounded and made up spots after that first stop. That’s what you want out of an experienced race team. When something goes wrong, you have to be able to overcome it and refocus. That to me is more important than the money because everybody puts so much time into it. There is nothing better than seeing them all high-five each other in victory lane.”

RODNEY CHILDERS, No. 4 Jimmy John’s Ford Fusion (Winning Crew Chief): “I felt like we had a good car for the race. We were able to lead a lot of that first stage. We had a tire get caught up in the fender on the left front on the first stop and lost some track position. We had to fight back from that. We really weren’t going anywhere and I felt like we had to do something different. We chose to pit out of sequence and come from the back. I really think that turned things around for us and put us in a better position to win the race. This is about everybody, it’s about Kevin (Harvick), it’s about the race team, it’s about everybody at the shop, and everybody at Ford Performance. Evrybody is just focused right now. It doesn’t matter what kind of race track it is or what kind of package it is we are going to give it 100 percent and come out and try and win races. We have done a really good job at that.”

DANIEL SUAREZ, No. 19 ARRIS Toyota Camry (Finished 2nd): “First of all I want to thank my team. They did an amazing job. Every single stop, we were gaining ground. I’m very proud of those guys. That is the way to do it. We had a car capable of winning the race. But you needed to have the right helper or the right pusher. Denny (Hamlin) did a hell of a job pushing me all the way through the center of turns 1 and 2 (on the final restart). And he had some damage. It was tough when the two of us weren’t connected. We tried. We rode well in the top five all night. This gave me a lot of confidence. The team has been doing a hell of a job the last one and a half to two months being competitive. It’s been a lot of fun obviously.”

JOEY LOGANO, No. 22 Shell Pennzoil Ford Fusion (Finished 3rd): “I thought the race was really entertaining. But most all-star races, in my opinion, are entertaining anyway. Any time you put a bunch of angry race car drivers on a race track with a million dollars on the line, we are probably going to do some stupid stuff. It was a lot of fun. … Kudos to NASCAR for trying something tonight. I know I went from front to back a lot tonight. We had some close, hard racing. I think the fans got a great show and it was a good show. I know I was working my little butt off. It does level the playing field out a little bit from some of the powerhouse teams. At the end of the day, you still had three of the best teams going for the win. … I thought the racing was pretty entertaining from the driver’s seat. I’d assume it was pretty entertaining from the TV booth and the grandstands.”

STEVE O’DONNELL, Executive Vice President and Chief Racing Development Officer, NASCAR: “This was about all of the folks at NASCAR and the speedway who have put in the work. I appreciate the entire industry that tried something different tonight. We will take a look at what we saw. The drivers say there are some things to take a look at. We have got to take time and digest what we saw. … We haven’t even looked through the stats. But, you can throw one out: we had zero lead changes at the loop last year, and tonight, we had 38. Our goal is to put on a great race that the fans enjoy.”

MARCUS SMITH, President and CEO, Speedway Motorsports, Inc.: “This was some of the best racing we’e seen on a 1.5-mile track in many, many years, and it was a lot of fun to watch. There were rumors that there was cheering in the press box. That’s unheard of and I think it’s fantastic. We had a great time. Fans weren’t using their seats and you could hear fans cheering over the cars. It was an awesome night by all accounts. … This package was way bigger than Charlotte. This was somehting that has a much bigger goal and that’s to have a positive impact on the sport. I think we accomplished that.”

TICKETS:
Tickets, pre-race pit passes and camping packages for next Sunday’s Coca-Cola 600 are available by visiting online. Kids 13 and under get in for just $10. Race tickets are also available at the gates or by calling 1-800-455-FANS (3267).