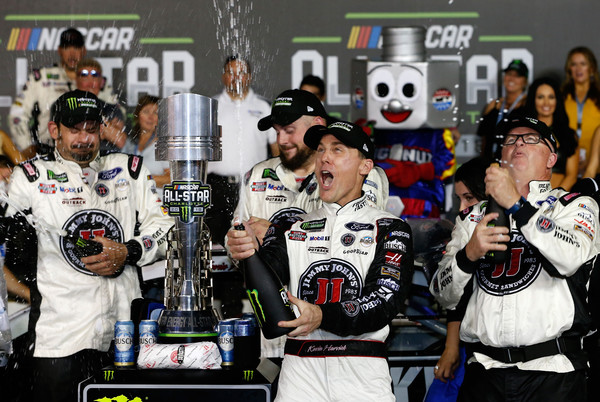 ● Harvick took the lead for the first time on lap seven.

● The Jimmy John’s driver held the lead for the remainder of the stage.

● Following the end of the stage, Harvick came to pit road for four tires and fuel. An issue during the pit stop dropped the team to fifth on the ensuing restart.

● The 2014 Cup Series champion raced his way back up to third in the beginning of the stage.

● However, Harvick fell back after getting hung out on the bottom and finished the stage in 10th.

● Harvick came to pit road for four tires, air pressure, wedge and fuel at the end of the stage.

● Harvick raced up to fourth at the start of the stage, but he got stuck in the middle with no help and eventually fell back to ninth.

● The Jimmy John’s driver found himself seventh when the caution flew on lap 55. He came to pit road on lap 57 and restarted 15th.

● After running just inside the top-10, Harvick stayed out on the lap-70 caution, which advanced him to fifth.

● Having pitted early in the stage, Harvick had fresher tires than everyone in front of him.

● More good fortune came on lap 75 when an accident took out most of the competitors that had newer tires than the No. 4 car.

● Harvick restarted fourth on the overtime finish for Stage 3 and moved his way up to the front, winning his second stage of the race.

● Harvick stayed out during the last stage break and restarted the final 10-lap shootout in the lead.

● A caution on lap 91 set up another two-lap shootout to decide for a million dollars, with Daniel Suarez lining up below Harvick in second, Suarez’ teammate Denny Hamlin behind him and Joey Logano behind Harvick.

● With a push from Logano, Harvick was able to hold off the Suarez-Hamlin duo on the inside, bring home a victory and keep his hot streak going.

● This was SHR’s second All-Star Race win. The first came in 2009 when Tony Stewart took the first win of any kind for SHR along with his first win in the All-Star Race.

● This was Harvick’s second victory in 18 career All-Star races. Harvick won the All-Star Race in 2007.

● Harvick’s margin of victory over second-place Suarez was .325 of a second.

Kevin Harvick, driver of the No. 4 Busch Light Ford Fusion for Stewart-Haas Racing:

Take us through the decision to start on the outside and hold on for the win.

“I thought on that last restart that my best opportunity was Logano. He is one of the best on the restarts. I knew he would work with me as good as possible, because that is just the way that most of us do it from Ford. We were able to just stay even through one and two, and I really thought once we got to the backstretch we could clear him. I didn’t want to be on the bottom. I didn’t feel my car was stable enough to be under someone when they were on my right side. I had to take my lumps through one and two and hope that the guy behind me was still with me when we got to the exit of two – and we were able to win. Just want to thank everybody from Jimmy John’s, Busch, Ford, Fields, Haas Automation, Mobil 1, Outback Steakhouse, Hunt Brothers Pizza, Morton Buildings, Textron Off-Road, Liftmaster and the fans, especially. We needed to be in control of the race to have a chance at winning. If we were third or fourth we would have been in big trouble. We needed to be on the front row with clean air, because that is the only chance our car would handle good enough. It was so fast.”

What are your overall thoughts on the aero package used for this race?

“A lot of pushing and shoving. It reminded me a lot of IROC racing back in the day. We will see what everybody thinks and go from there.”

The Monster Energy NASCAR Cup Series returns to points-paying racing on Sunday, May 27, with the Coca-Cola 600 at Charlotte. The longest race on the Cup Series schedule gets underway at 6 p.m. EDT with live coverage provided by FOX, PRN Radio and SiriusXM NASCAR Radio Channel 90.