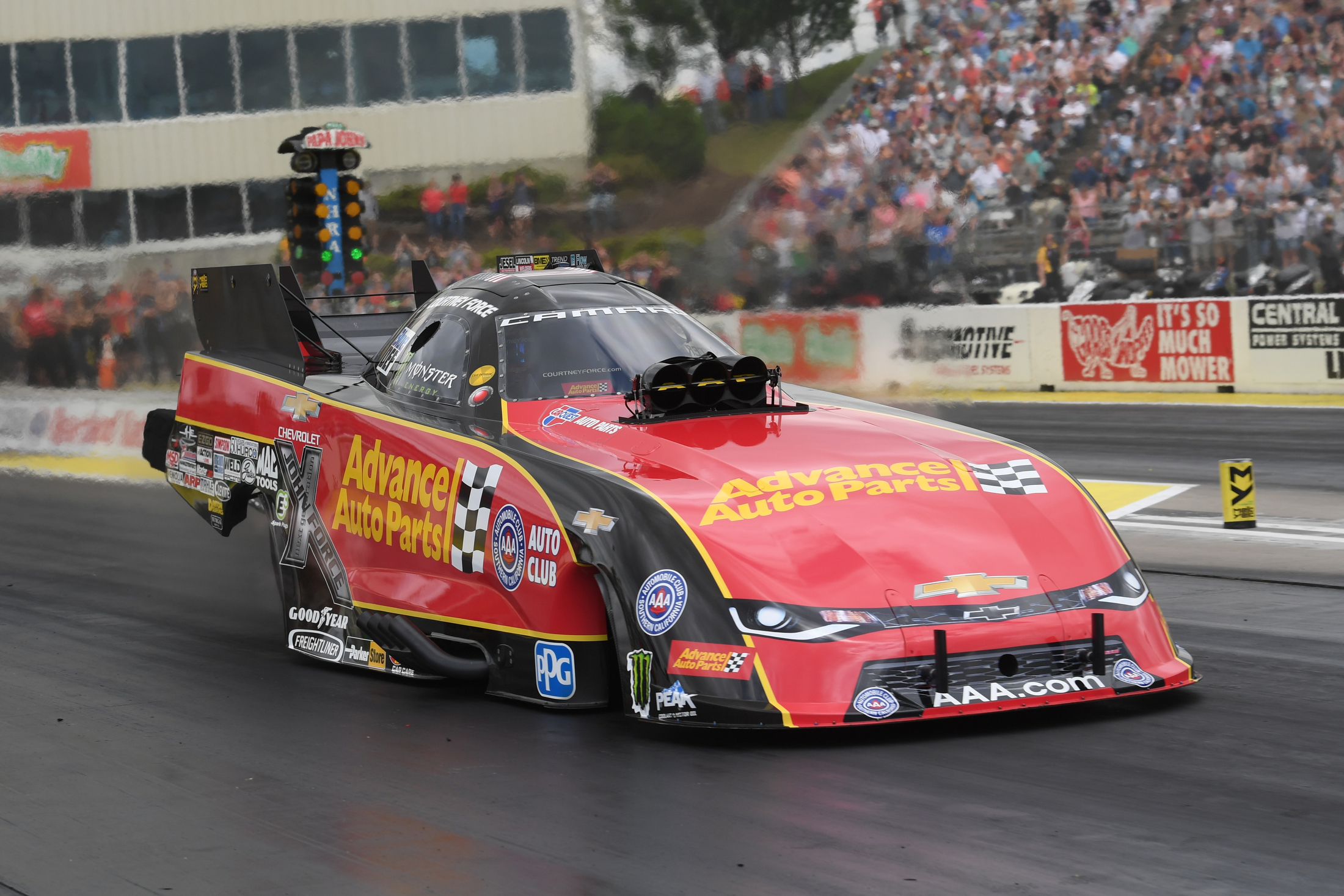 Courtney Force and her Advance Auto Parts Chevrolet Camaro SS Funny Car will start race day from the No. 1 position for the fifth time this season after holding on to the top spot through qualifying Saturday at the Menards NHRA Heartland Nationals at Heartland Motorsports Park. John Force will kick things off from the No. 11 spot, Robert Hight will be looking to shake things up from the No. 14 spot and in Top Fuel, Brittany Force will be looking to go rounds from the No. 7 spot.
Courtney Force collected her third consecutive No. 1 qualifier when her 3.911-second pass at 321.73 mph from Friday night held through two additional qualifying rounds on Saturday. Force had a 4.574 and a 4.453 during the two rounds on Saturday.
“Everyone said it was going to be hotter today but then we still had cloud cover and you heard all through Top Fuel and Funny Car that there are a lot of cars who improved on their times from yesterday. You never know, they can jump right up and pass you,” Force explained. “So, we were definitely pushing. Obviously, we had nothing to lose. We were pushing that car to see what we could run. We were pushing for the 80s in Q4. We weren’t able to make it happen, unfortunately. We had a hole out so you have to step off of it. Luckily, we already secured that No. 1 spot before the end of the round. It was still a job well done by my entire Advance Auto Parts team for Chevy, for Peak, for Auto Club, Monster Energy, CarQuest, Parker Stores, all our sponsors. It’s really great to kick off race day here at Heartland Motorsports Park in the top spot and we’re hoping for a great day tomorrow.”
Force has qualified No. 1 at Heartland Motorsports Park once before when she doubled up with sister Brittany Force in 2014. Courtney Force went on to win the event to mark the 100th NHRA professional win by a female. Also boding well for the Funny Car phenom, Force picked up both of her 2018 victories from the No. 1 position. When eliminations begin, Force will race against Richard Townsend, an opponent she has yet to face making him the 41st difference driver she has raced in her seven-year career.
Sixteen-time Funny Car world champion John Force will start his race day from the No. 11 spot after a 4.053 pass at 314.97 in his PEAK Coolant and Motor Oil Chevy Camaro SS during the third qualifying session jumped him up one spot. Force’s interesting start to the season has him not taking the fact that he’s qualified for granted.
“We’re in the show. That’s all that matters,” Force explained. “We’ll keep learning, keep looking to improve. Tomorrow anything can happen. Courtney is low in the Advance Auto Parts hot rod, Robert and I are still struggling and Brittany struggled a bit today but we’ll all be good. Tomorrow is a whole new day. It’s race day.”
In the first round of “the show,” Force will line up with Tommy Johnson Jr., a veteran driver that Force is 34-14 against, including 3-0 at Heartland Motorsports Park.
Robert Hight maintained his No. 14 position through Saturday qualifying. His 4.163 pass at 241.20 in the Auto Club of Southern California Chevy Camaro SS from Friday night is enough to have him racing Cruz Pedregon in round one.
“Well, it’s pretty obvious that we’re still not where we want to be but that’s just the nature of the beast. We’re still trying to get the balance right on our Auto Club Camaro,” Hight said. “Cooler conditions tomorrow, who knows? But I’ll tell you one thing, I would never count out Jimmy Prock and this Auto Club team. We’ve won here before and we’ve won from this qualifying position before so I’ll just go up there tomorrow expecting another long work day.”
In Top Fuel, reigning world champion Brittany Force moved into the No. 7 position with a 3.792 pass at 305.42 mph in her Monster Energy dragster during the final qualifying run. Force has steadily improved through qualifying to land her narrowly in the top half of the field.
“We struggled a little bit here. We only qualified No. 7 but it’s anybody’s race tomorrow,” Force said. “Conditions are going to be different and anything can go down on race day. We got some good runs in. Hoping for a long day tomorrow. We’ve got Richie Crampton in the first round. It’s definitely a challenge when conditions change, but we’ve always run pretty well here. Cool conditions, we can make that happen. I’ve got a great team behind me with Alan Johnson and Brian Husen and my whole Monster Energy team.”
Against Crampton, Force is 5-9 but her most significant win against the Australian came at the 2017 NHRA Finals in Pomona when she clinched her Top Fuel world title by beating him in the second round.
Eliminations at the Menards NHRA Heartland Nationals will begin Sunday at 11 a.m. Fans can catch the action live at 2 p.m. ET on FOX Sports 1 (FS1).
JFR PR/Photo Credit NHRA Media