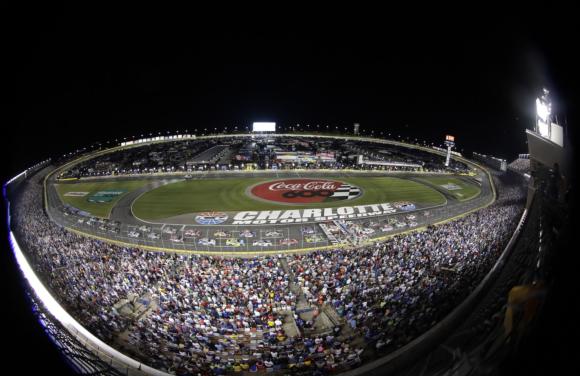 Charlotte Motor Speedway is only one week from dropping the green flag on the May 27 Coca-Cola 600, NASCAR’s toughest test of man and machine. Before the high-octane racing action kicks off, here’s a look at some things fans can’t afford to miss when taking in the sensory overload that is the most patriotic race weekend of the year at America’s Home for Racing:

Eli Young Band Pre-Race Concert
Get ready for the Eli Young Band to turn up the excitement prior to the legendary Coca-Cola 600 on Sunday, May 27. The platinum-selling, Grammy-nominated country music superstars will amp up the most patriotic Memorial Day weekend event in sports, with the Coca-Cola 600 Pre-Race Concert electrifying a spectacular salute to the troops at America’s Home for Racing.

The concert takes place just hours before the stars of NASCAR compete in racing’s only 600-mile event and the toughest test of man and machine. Additionally, the Eli Young Band concert is FREE with the purchase of any Coca-Cola 600 race ticket. Known worldwide for chart-topping hits including “Crazy Girl” and “Even If It Breaks Your Heart,” the Texas-based group will perform a rocking concert in front of a roaring crowd of race fans ready to salute America’s freedom on one of the year’s most patriotic weekends.

Coca-Cola 600 Military Salute
Charlotte Motor Speedway will incorporate all five branches of the U.S. Armed Forces in an unprecedented, spectacular pre-race Salute to the Troops. This year’s edition of the Memorial Day weekend celebration will highlight the Department of Defense’s “This is Your Military” initiative by paying tribute to each of the military branches, featuring special guests and showcasing vehicles and awe-inspiring displays of military prowess from the U.S. Army, the U.S. Marine Corps, the U.S. Navy, the U.S. Air Force and the U.S. Coast Guard. Fans and drivers will also get to #KnowYourMil through interactions with service members.

On race day, fans will be treated to aerial thrills and ground-shaking firepower as F-15 fighter jets and Blackhawk helicopters with a rappel team join Howitzers and Humvees in touring the iconic 1.5-mile superspeedway before NASCAR’s biggest stars take the green flag.

Dirt Roads are Open for Business
Racing action isn’t limited to the 1.5-mile superspeedway. On May 25 – the Friday before the Coca-Cola 600 – The Dirt Track at Charlotte hosts the World of Outlaws Craftsman Sprint Cars in a dirt-flying slugfest of high-speed winged sprint cars. NASCAR luminaries including Tony Stewart, Kyle Larson and Kasey Kahne own Outlaw sprint car teams that will compete in the one-night-only event. Who knows? Maybe one of the stock car stars might throw on a helmet and driver’s uniform and take part in the race.

Join the Ultimate Race Day Pit Party
Want to get even closer to the action? Purchase a Coca-Cola 600 track pass and join in at the Pit Party. The Race Day Pit Party lets fans rub elbows with the stars of the sport before they engage in wheel-to-wheel action on Charlotte’s iconic 1.5-mile superspeedway. Before the Coca-Cola 600 rolls into high gear, fans will have the opportunity to take part in Q&A sessions with NASCAR personalities. For an added bonus, visit the Trackside Live stage for more driver appearances as well as live music.

Say ‘Cheers’ with Speedway Beers
Following last year’s historic rollout of 600 Ale, Charlotte Motor Speedway’s first craft beer, the speedway and Cabarrus Brewing Company turned things up a notch with the unveiling of Redneck Hill – a spectacular, smooth, American Ale. The new craft beer is named for Redneck Hill, the raised spot in the speedway’s infield between turns 1 and 2 which in the 1960s became race fans’ prime spot for watching the race, partying and grilling.

Country music legends Willie Nelson and Marty Robbins visited Redneck Hill, as did Pixar executives while they researched the movie that became “Cars.” Redneck Hill’s history as an iconic part of Charlotte Motor Speedway lore enters a new chapter with the craft beer, which will be on sale for just $8 per 16-ounce souvenir can at all major speedway events.

Witness NASCAR’s Future Stars
The May 26 Alsco 300 puts the rising stars of the NASCAR Xfinity Series front-and-center at Charlotte. The historic event – one of the Xfinity Series’ crown jewels – features a mix of Monster Energy NASCAR Cup Series veterans mixing it up with future champions like Christopher Bell, the driver of the No. 20 Joe Gibbs Racing Toyota. Bell and up-and-comers like Tyler Reddick and Daniel Hemric will duel in the sun for a shot at glory.

ARCA is Back
The ARCA Racing Series presented by Menards will make a triumphant return to Charlotte on May 24, during Spectrum Pole Night. The first ARCA race at Charlotte since 2004 will bring stock car racing’s future standouts to a world-class stage during the 10 Days of NASCAR Thunder following qualifying for the Coca-Cola 600. The 150-mile race will provide drivers with a special opportunity to showcase their skills in front of the racing world’s most prominent teams.

16,000 Square Feet of Awesome
Charlotte Motor Speedway has a multitude of ways to entertain fans throughout the 10 Days of NASCAR Thunder, including the giant Speedway TV, a monstrous 16,000-square-foot high-definition TV situated along the backstretch. Speedway TV has revolutionized the at-track experience by providing live leaderboard updates, replays, live in-car cameras and other interactive content for fans throughout the facility. With cameras roaming the pits and the grandstands, fans might even see themselves on the 200-foot-by-80-foot behemoth. And after the checkered flag falls on May 27, don’t forget to grab your tickets for the Sept. 28-30 Bank of America 500 on Charlotte Motor Speedway’s innovative ROVAL™ road course oval.

TICKETS:
Tickets, camping and upgrades for every 10 Days of NASCAR Thunder event are available at the gates, by visiting charlottemotorspeedway.com/tickets or calling 1-800-455-FANS (3267).